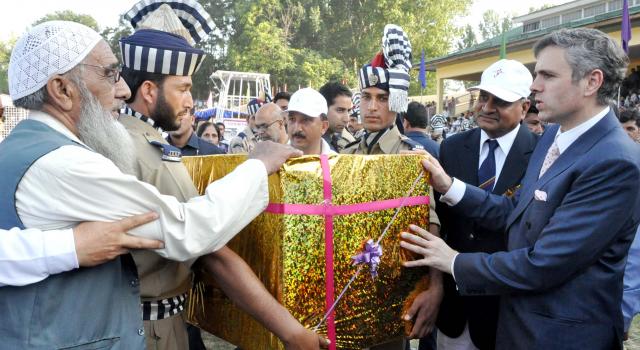 Srinagar,July 18(Scoop News) – Paying rich tributes to J&K Police Martyrs at the conclusion of 14th JK Police Martyrs Football Tournament at Bakshi Stadium here, Chief Minister, Omar Abdullah said that return of peace in the State is greatly due to the sacrifices made by martyrs.

The Chief Minister said that martyrs gave away their lives to safeguard the future of the State and make its present peaceful. He said that the families of martyrs need focused attention for their welfare and rehabilitation. "They have given their dare ones for the safety and security of the State and its people", he said assuring all support of the government to martyrs’ families for their development and well being.

The Chief Minister also gave away special relief items to the martyrs’ families on the occasion provided by the Police Department.

Minister for Youth Welfare and Sports, R. S. Chib gave away trophies to winners and runners up teams as also the individual prizes to the participating players.

Speaking on the occasion, Director General Police, K. Rajindra highlighted the sacrifices made by the J&K Police Jawans for peace and security of the State and its people. He said that Police Department commemorates this sacrifice of the martyrs by organizing Martyrs Football Tournament which is a unique tournament of its kind in the country. He said Police Department takes all care of martyrs’ families and provide them assistance for welfare and development.

He said 55 teams participated in the tournament of which 8 were from outside the State.