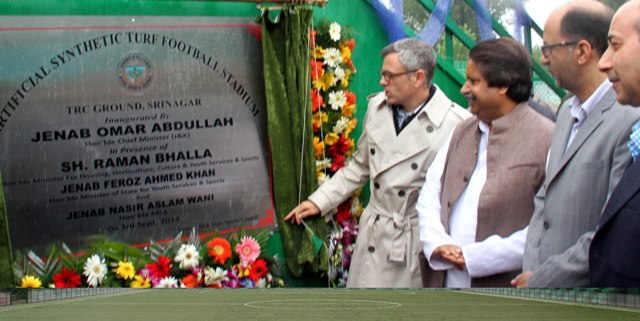 Srinagar, September 03, (Scoop News)- Chief Minister, Omar Abdullah Wednesday inaugurated Synthetic Turf Football Stadium at TRC Polo Ground here which is first of its kind in the State.
Minister for Youth Services and Sports, Raman Bhalla, Legislator Nasir Aslam Wani, Commissioner Secretary Youth Services and Sports, Khurshid Ahmad and Director Youth Services and Sports, Dalip Thusoo were present on the occasion among others.
The Synthetic Turf for the Stadium has been procured from Limonta Italy and is laid over six years of base course. The stadium is the capacity for 15000 spectators with facility for car parking. The field of is international standard of 115 meters into 70 meters in size. The estimated cost of the project is Rs. 4.50 crore.
Interacting with the sports persons who were present on the occasion besides representatives of Jammu and Kashmir Football Association, the Chief Minister said that development of sports and nurturing the talent in different games is receiving full attention of the Government. He said various new stadia have been completed while many are in the process of execution.
The Chief Minister said that Bakshi Stadium Srinagar is being re-build and upgraded to the international standard to host national and international events in football and athletics. He said an amount of about Rs. 100 crore is being spent on this project. He said Rs. 100 crore are also being expended on making the M A M Stadium Jammu to the international standard and equipping with all modern facilities.
Omar Abdullah said that upliftment to the sports activities at the district and block level by providing various facilities to the young people in different fields are being encouraged. He said during the last about six years scores of sports fields have been developed besides providing added sports facilities in existing stadia.
The Chief Minister said that sports talent in schools, colleges and universities is also being nurtured to develop the sports persons of excellence in all the fields of sports. He said during the last about six years the sports personnel of Jammu and Kashmir have exhibited their excellence and bagged first and other prizes and medals in different events at the national and international levels. He underlined the need of nurturing sports talent right from the childhood. He emphasized on enhancing sports activities in the State and encouraging more and more youth to take part in different sports.
Minister for Youth Services and Sports, Raman Bhalla said that sports not only inculcate discipline in youth but also gives fillip to their determination to achieve the goals. He said Government is given full attention to encourage sports activities at Village, Block, District, Division and the State level.
MORE AT http://scoopnews.in/det.aspx?q=40519