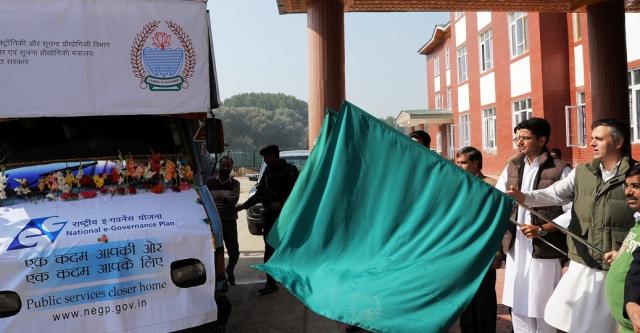 The Chief Minister said that his government has taken various measures to use IT initiatives to curb chances of corruption and making service delivery prompt. He referred to the measures of e-tendering and e-procurement in various government departments and said that it has upgraded the quality of service and brought more transparency in the functioning.

The Chief Minister was addressing at a function after he and Union Minister of State for Communication and IT Sachin Pilot launched the National Common Service Centers (CSCs) Out Reach Programme from Ganderbal near here this morning.

Omar Abdullah said that CSCs known as Khidmat Centers in the State would get strengthened by this programme aimed at delivering common public services like Ration Card, State Subject, Death and Birth Certificates, Driving Licenses, Revenue Papers and  similar other services to people through Khidmat Centers smoothly and hassle free. He said the implementation of Public Service Guarantee Act, guaranteeing time bound public service delivery to people, would be further strengthened by the application of information technology and making e-governance rule the roost in government departments.

The Chief Minister expressed gratitude to the Center for extending help to the State in strengthening IT Sector and expressed hope that the data centre being established in the State jointly by the State and Centre Governments will be launched soon.

Omar Abdullah also expressed hope that knowledge linkage between various educational institutions through IT initiatives sponsored by the Centre Government would provide vast educational spectrum to the students of the State to pursue goals in higher education sector.

The Chief Minister said that information technology is being utilized in the health sector to strengthen it and develop linkage of State health institutions with the reputed institutions across the Country and abroad. He said Tele-conferences on medicine and remote surgery utilizing IT methods have been introduced in the State. He said “we have to move fast in the sector to upgrade it and utilize IT initiatives to keep pace with other states and obtain maximum benefits of the modern technology.

Speaking on the occasion, the Union Minister for Communication and IT said that Common Service Centers are a crucial part of National e-Governance project which is a measure initiative for improving the quality of basic governance concerning common man. He said one lakh CSCs across the country are providing various government services to the people which including birth, death, domicile, caste, income certificates, MGNREGA payments, computer courses, financial services, online railway and airline ticket booking etc..

He said the flagging of the exhibition van of National Out Reach Programme at Ganderbal today rolled out the Phase-I of this prestigious programme in 11 states across the country and the campaign will cover 115 khidmat centers (CSCs) in 5 districts of . “We are committed to fully support e-Governance initiatives of the State Government and Rs. 40 crores have been sanctioned for CSC project in the State.

The Minister announced that a extension center of National Institute of Electronics and IT will shortly be opened in Leh. It would have the Capacity to Train 50 students at a time. This will provide employment opportunities to youth of this area. Sachin Pilot also announced Rs. 7 crore for computerization of all colleges associated with Kashmir University Computerization Project.

He said 16 educational institutions have been identified for connection to the National Knowledge Network for shared learning and high quality collaborative research and e-learning. He said of these, 10 have already been connected and the rest are in the process of connection. He said government Medical college, Srinagar Central University of Kashmir and Sher-e-Kashmir University of Agricultural Sciences and Technology would be integrated into NKN by end November, where as Central University at Jammu, Sher-e-Kashmir University of Agricultural Sciences and Technology for Kashmir, and Defense Institute of High Altitude Research at Leh would be connected by December.

The function was also addressed by the Minister for Forests, Mian Altaf Ahmed and Union Joint Secretary Dr. Kumar while various officers of the State and Centre Government were present on the occasion.