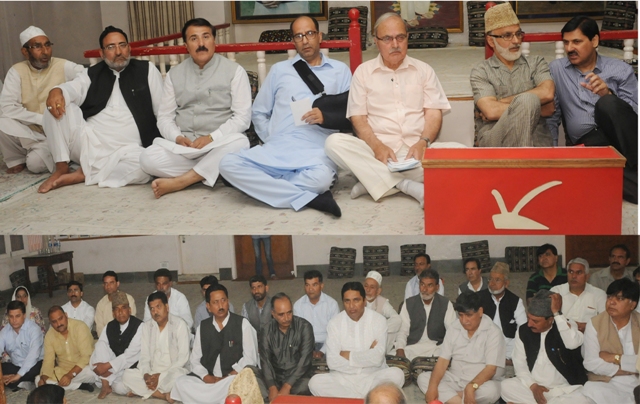 SAGAR AND SENIOR NC LEADERS DURING A MEETING IN SRINAGAR

Srinagar June 16th: National Conference Working President Omar Abdullah has summoned a meeting of the Party Central Working Committee (CWC) on the 18th of June at 9:00 am at the Party Headquarters at Nawa-e-Subah Complex in Srinagar to discuss various important measures and party’s overall strategy for the forthcoming Assembly Elections in the State.

The National Conference Provincial Working Committee for Kashmir Province adopted a resolution to welcome the decision taken by the party High Command in appointing Jenab Ali Mohammad Sagar as the General Secretary of the party and also acknowledge with a lot of gratitude the role played by Jenab Sheikh Nazir Ahmed (Advocate) for the last more than five decades in strengthening the party in various key positions of responsibility, a role and service that is unparalleled and will be remembered for generations to come.

The Provincial Working Committee also adopted a resolution pledging to continue its unflinching and unfaltering faith in the leadership of Honorable Party President Dr. Farooq Abdullah and Honorable Party Working President Jenab Omar Abdullah while appreciating the role played by them in leading the Party and the State with a progressive, inclusive vision and inspiring leadership in spite of various challenges in the State.

In another resolution adopted by the Provincial Working Committee the party expressed its gratitude and appreciation towards the Honorable Chief Minister of J&K Jenab Omar Abdullah and the State Government for taking landmark steps of enhancing the recruitment and employment policy, of meeting the genuine demands of Rehbar-e-Taleem Teachers, of enhancing the retirement age of State Government Employees from 58 to 60 years and of increasing the upper age limit of eligibility to apply for government employment from 37 to 40 years. The Provincial Working Committee also urged the State Government to create more job opportunities for the youth. implement further infrastructural improvements in the power distribution system in order to mitigate problems faced by consumers, reduce the power tariff by taking into account the financial hardships of the common masses. Allocate and allot ration to consumers as per the Census of 2011 and hence in a manner and measure of proportion that is just and adequate as per the requirements of the individual consumer.

Various members of the Provincial Working Committee spoke on the occasion and reiterated their unfaltering faith in the party leadership and its mission of public service.