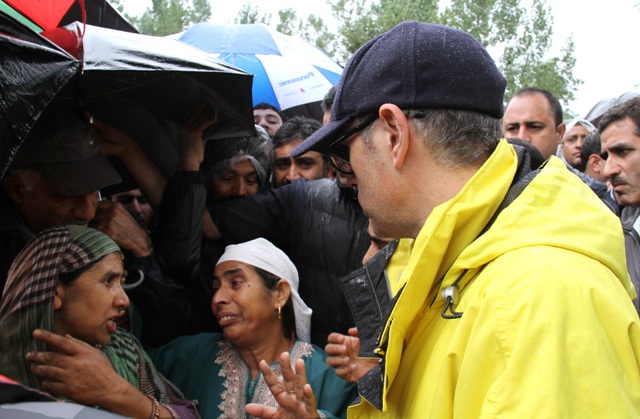 Srinagar, September 05, (Scoop News)- Chief Minister, Omar Abdullah after overseeing the rescue operation in the Srinagar inundated areas in the night hours, this morning travelled to various areas in Pulwama, Baramulla and Budgam districts to take personal appraisal of the flood situation and monitor ongoing rescue and relief operations.
The Chief Minister visited Newa, Kakpora, Lathipora, Pandrethan, JVC Bemina, Srinagar-Narbal National Highway, Nowgam, B K Pora and other areas in the districts of Pulwma, Budgam and Baramulla.
The Chief Minister interacted with affected families showed his solidarity with them and said that government would take all measures to help the people in the current hour of crisis. He also received brief on the loss of paddy and other crops besides damage to the orchards.
The Chief Minister said that the first concern of the administration at present is to rescue people and evacuate marooned population to ensure that no loss of human lives take place.
The Chief Minister gave direction to the administration to provide boats wherever required. He also directed for keeping health institutions functional and providing food and other facilities to the families who have been camped in shelter houses.
The Chief Minister also received latest brief from the Divisional Commissioner Jammu about the flood situation in the Division and directed him to be at the beck and call of affected people providing all possible help. He also received brief about the discharge of water in river Chenab and Tawi and asked the administration to evacuate the people from the banks of rivers to the safer places.
The Chief Minister last night in a video conferencing received full report of flood situation in various districts of Kashmir and Jammu. He is receiving minute to minute appraisal of the situation and the status of rescue and relief operations undergoing in the flood-hit areas to save the human lives.