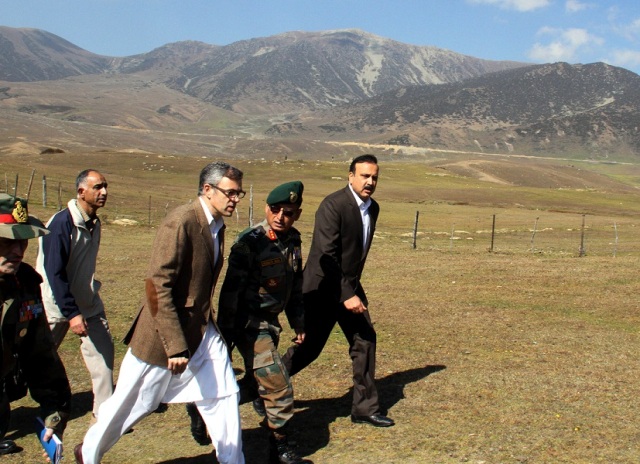 Srinagar, October 22, (Scoop News)- Welcoming the complete clearance of Range Area from dangerous materials in Tosha Maidan by the Army, Chief Minister, Omar Abdullah Wednesday said that the demand of public in this regard has been fulfilled and the area could be developed as one of the choosiest tourist resort in the State. He said the focus will be concentrated on developing Tosha Maidan for tourism related activities to generate employment opportunities, trade and business in the area.
Under Mission Falah Army has completed the clearance of Range Area from dangerous material comprising of 69 sq. kms. in Tosha Maidan area. The Army also conducted civic action by organizing medical and veterinary camps at Drang, Sutaharan, Khag, Hamchipora, Tosha Maidan and Chiuyadara villages.
This brief in this regard was presented to the Chief Minister by the Army this morning during his visit to Tosha Maidan to get latest appraisal of the clearance of the Range Area, rehabilitation programme and civic actions launched by the Army for the benefit of the people.
The Chief Minister while addressing a gathering of Army officers and the civilian on the occasion said that the clearance of Range Area from dangerous material by the Army in a stipulated timeframe is highly appreciable. He said people of the area wanted Tosha Maidan to be the attraction of tourists like Gulmarg, Pahalgam, Sonamarg, etc. and their this cherished desire would be fulfilled now.
Minister of State for Home, Sajjad Ahmad Kitchloo and GOC 15 Corps Lt. Gen. Subrata Saha was also present on the occasion.
The Chief Minister was told that more than 3000 patients were given medical treatment in the medical camps organized by Army besides treating about 9000 animals against various diseases.
The Chief Minister was informed that the assistance and treatment of Master Fayaz Parrey has been taken on three lines of physical and mental health, education and improvement of habitat. The boy has been sent to Artificial Limb Centre, Pune for treatment and fitment of prosthetic limbs. He is being adopted by Victor Force for his education at Army Goodwill School (AGS). Action is being taken to make his house disability friendly.
The Chief Minister was told that as many as 25 hearing aids and 25 spectacles have been provided to 50 persons while in Drang area 300 samplings have been planted through children. The financial assistance of Rs. one lakh is being provided to next of kin of late Bilal Ahmad who lost his life.
Army also organized sports events and conducted education tours to Tosha Maidan area. Pre-recruitment training to 47 young boys is undergoing for guiding them to take recruitment test to qualify for joining the security forces. As part of an employment drive a mobile phones repairing course is being conducted at Community Development Centre Khag for 30 youth by the Army.
The Chief Minister was told that survey of widows due to range accidents was carried out and the list was ratified by the District Development Commissioner, Budgam which include 21 widows, 32 children who need educational assistance and 13 children for skill development training.
Jute Bag making course for 30 women is being run by the Army besides training course for 20 women in tailoring, stitching and designing. 50 students of Gujjar and Bakerwals are being provided schooling and establishment of AGS at Drang is under active consideration.
The Chief Minister while appreciating the actions taken by Army to benefit the civil population and clear the range area from dangerous material expressed the hope that the Army would continue to provide necessary help to the civil population in their day-to-day life affairs.
SOURCE http://scoopnews.in/det.aspx?q=41789

Filed under: News, State Government
Share Tweet Pin G Plus Email
previous article: “We don’t know”, says Rear Admiral Kirby in response to questions of whether or not a pallet of US weapons fell into the hands of ISIS fighters during airdrop
next article: Governor distributes over Rs.28 lakh compensation to pony owners