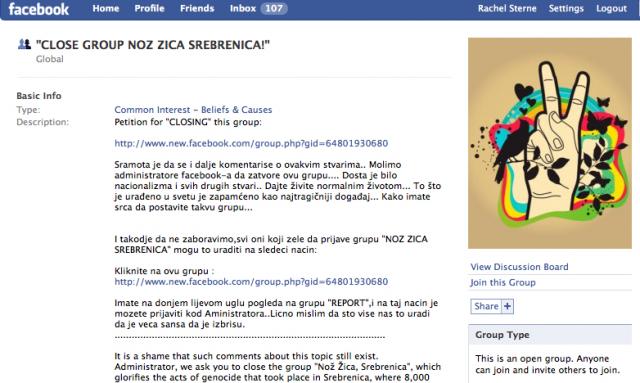 “Knife, Wire, Srebrenica!” (NoÅ¾, Å½ica, Srebrenica!) is one of the favorite slogans of Serbian nationalists; it alludes to the 1995 Srebrenica massacre.

[…] Furthermore, this group propagates hatred to all muslims according to its description “za sve koje mrze Muslimane” which means “for all those who hate Muslims.” […]

Serbian blogger Nikola KneÅ¾eviÄ‡ was angry and reacted strongly on his blog, linking to both Facebook groups. Among other things, he wrote (SRP):

[…] A normal person is ashamed of the thing that makes a fool proud. After everything… After the loathsome footage of the Scorpions liquidating Muslims, it is not clear to me how some young people can be imbued with so much hatred towards other people who are different from them… […]

As far as the ban’s concerned… hmm, it is not a bad idea but I don’t like any kind of censorship… tomorrow you will react the same way if someone creates a group advocating traditional values… I think it will be better to become a member of this group and explain to the young people that what they are doing is wrong…

Racism, homophobia and any kind of hatred mainly originate from not knowing of facts, as well as from a fear of the unknown things.

People are unsatisfied due to poverty and misfortune and uncertain future, and some fools abuse it

This article was initially published by Global Voices under the headline Serbia: Facebook Group of Serbian Nationalists.