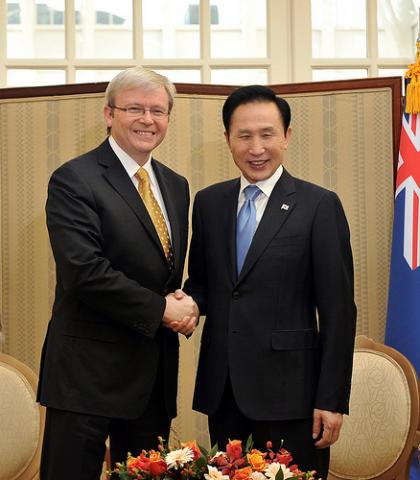 With self-righteous anger and vengeful spirit members of the Australian Labor Party caucus discarded a Prime Minister who more than any other leader in the past 50 years delivered substantive social benefits for all Australians. On this record of his leadership, the media are in surprise agreement.  Yet, the Labor party power brokers never wanted his leadership. So it’s significant that they took the very first opportunity to be rid of him.  And daily since June 24, they lie about what he did to deserve it. And so few voices seem outraged.

The narrative emerging from a fairly young journalism pool in Australian media, is that Rudd was a tyrant (he yelled at a few people – no names, no pack drill), and demanded that they work as hard as he did to steer the country through unprecedented difficulties. So there is now a Youtube spoof of him as hitler. Added to that we are asked to believe that no one knew what he stood for.  And that he has a martyr complex.  Oh of course, how simply that explains what brought him down!

I wonder about our preference for amnesia. Kevin Rudd made it plain from the outset he marched to a different drum to the Labor Party factional mafia. He aspires to the politics of the assassinated German theologian, Dietrich Bonhoeffer of World War II, and prior to his election he’d published a discussion paper that asks questions of what it means to be truly Christian in politics. His refreshingly ethical approach to the business of power resonated with the Australian people who supported him to record levels, and would have continued to support him more than any other Prime Minister since polling began.

But the Labor party wants none of this ethic with deference to Christ. They want what they’ve been used to post World War II: The raw boned political thuggery and cleverness that prides itself on pragmatism, party loyalty, (read craven factional allegiances), every failure to comply avenged by character assassination and political death.  In truth, some remarkably stunted people cut a wonderfully tall poppy down for the fact of being tall enough to get above the dreary fray of deal making as usual, and give Australians real hope for the future.

The main beneficiaries of the party room coup, the new PM, Julia Gillard and her deputy Wayne Swan are the same two people who persuaded Rudd into the vulnerable place from which they wielded their political knives. It was their idea that he step back from his crusade for an emissions trading scheme. Rudd’s mistake was to listen to them, and accede to them when he so disagreed with them.

It seemed an inexplicably gutless about-face in my eyes and in the eyes of so many other Australians who were confounded that our Prime Minister would back away from what he described as the greatest moral challenge of our time.  Naturally, the polls dramatically dropped from stellar heights of popularity to eventually stabilize at merely normal levels.  Nonetheless, the Labor party was in no danger of losing the next election.  Despite what Gillard the usurper repeats as a mantra in her press conferences as caretaker Prime Minister, a solution had already been worked out with the mining industry to resolve the issues of increased taxation on their profits, and so even the excuse of that controversy is taken from her.  It was an act of sheer spite.

Julia Gillard’s rhetoric in explanation for politically destroying Rudd as a rival, is that she acted in the national interest.  Really?  That’s the first red flag that she intends to dictate to us a nanny state of being, our new definer of what’s in our best interests.  I suspect many Australians, like me, will become conservative for the next election.  Already, I’m not alone in hoping that Malcolm Turnbull who suffered a similar fate in the Liberal Party, will be called back to leadership of the conservatives on the strength of this Labor Party vandalism.

But I’ll tolerate the loose cannon Tony Abbot now leading the conservatives ahead of the unscrupulous people who usurped to themselves unearned power, with all deceit.  Australians in Australia seem to be like frogs in boiling water, without reference points, by degrees tolerating the intolerable. Voices need to be raised, but few are.  Political assassination of people better than us, and achieving the previously unachievable, should never be allowed to be normalized. But that’s what Gillard the usurper is attempting to do.  God save Australia.