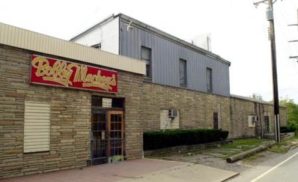 Bob Mackey’s Music World in Wilder, Kentucky – one of the most haunted places in America. Called: “Hell’s Gate” – by many.  It is the site of intense demonic activity.

They say the Devil is present everywhere that evil things happen. He is reflected in anyone who says: I don’t accept love, the love of fellow human beings, and rejects the love of God. And in many places, we see his presence known, in all massacres, atrocities, in every act of torture, murder. He is present in physical catastrophes, in acts of wanton terrorism and violence, in every concentration camp, in all evil.

Sometimes the Devil shows himself strangely in cases of possession. But he is much more dangerous where he remains hidden can’t be seen and done away with through the “rite of exorcism”, for example (Mark 16:17).

In my life I have seen a lot of strange things, even from a very early age. None more strange perhaps than demonic possession – where the Devil can manifest in various ways, such as bodily contortions,  in unnatural abilities and super human strength, knowledge of hidden things, psychic phenomena and manifestations and the ability to speak in foreign languages and/or unnatural voices.

In my case I witnessed all this first hand within a span of just a few hours when I accompanied a group of friends one night to Bobby Mackey’s Music World in Wilder, Kentucky in the early 1990’s.

Unknown to me at the time was the fact that Bob Mackey’s Music World was considered one of the most haunted locations in America (source: Wikipedia http://en.wikipedia.org/wiki/Bobby_Mackey’s_Music_World).

What happened that night was unbelievable and even today I am haunted by the memories of it.

I won’t get into a lot of details except to say that the experience that night changed my life forever.

Afterward I became much more religious – in part because I witnessed the “reality of the unseen” in ways people can only imagine.

Today I no longer doubt the existence of God or the Devil.

I know both are real.

I suppose it’s one thing to believe in something you can’t see – it’s another thing entirely to see things you can’t believe.

Filed under: Lifestyle, Religion
Share Tweet Pin G Plus Email
previous article: UT for Ladakh a poll gimmick: Mufti
next article: The problem of undiagnosed mental illness in the military