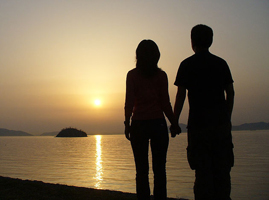 Over the years, marriages have been helped with a classic technique.  As a divorce attorney for nearly 30 years, I have a pretty good sense of what works and what doesn’t.

Reading about the process doesn’t really do it justice. Using it makes a difference.

This concept is said to originate from a book called Getting the Love You Want.

There are three basic steps.

Here’s how it works.

When there’s an argument heating up, there has been an argument, or there’s just a point where there needs to be some venting, one or both spouses can call for a “dialogue.”

Once one of the spouses calls for a dialogue, then the other spouse pauses.

The ground rule is that one person talks at a time.

The spouse who called for the dialogue starts the process. That spouse calmly says what they are trying to tell the other person.

The first step is mirroring. The listening spouse repeats back everything they heard the other spouse say. There can be paraphrasing, but without analyzing or critiquing. Importantly, the person paraphrasing does not have to agree with what has been said by the first spouse (and probably won’t).

Then, they ask if there’s more.

Step two is validating. Once the first spouse says there’s no more, then the listening spouse will attempt to validate what the other spouse said by either indicating that that makes sense, or by restating the part that does make sense, and then asking about what doesn’t make sense to them.

In the final step, Empathy, the listening spouse takes a guess as to what they imagine the speaking spouse might have been feeling with regard to what they have been saying. If the speaker has already said this, then the listener can simply reflect this back once more.

Importantly, once the first spouse has said what they have to say, and the listening spouse has mirrored, validated, and empathized, then the whole process reverses.

The spouse who listened the first time around now steps into the role of speaker, and the other spouse becomes the listener.

The idea is that the couple doesn’t start a new topic, but rather the new speaker can give their take on the topic they’ve been discussing.

This technique has been proven effective (ahem). Your mileage may vary.

Nick Nichols is a divorce attorney with nearly 3 decades of experience.  His debut novel, Broken Promises, is an intense and emotionally charged thriller about an ambitious young lawyer with a case that will catapult his career or ruin his life.

Filed under: Lifestyle, Love
Share Tweet Pin G Plus Email
previous article: Tough Questions for a Divorce Attorney
next article: How to Stretch Properly before Exercise