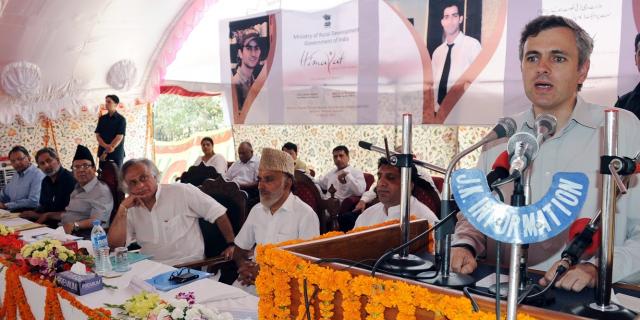 Srinagar,July 23 (Scoop News) – Underlining ‘Himayat Programme’ as right initiative to tackle unemployment crisis in the State, Chief Minister, Omar Abdullah Monday emphasized the need for keeping this out of all interventions and influences making merit only criterion for selection of deserving youth.

"Merit should be only criterion to select the youth for training under Himayat keeping political and other influences strictly away from this programme to ensure its success and retain faith of young boys and girls in this initiative", he said adding that the success of this programme lies in keeping it away from all interferences and influences.

Addressing a training-cum-placement letters presenting programme under ‘Himayat’ at JKEDI complex near hear, the Chief Minister said that the youth of Jammu and Kashmir are talented enough to prove their mettle and ability at all fronts. "They only need opportunity and exposure to prove their capacity and capability of rendering meritorious service in any organization", he said adding that Himayat is right initiative in this direction. He said it provides ample chances to youth to upgrade their skills through trainings and obtain jobs in private sector.

The Chief Minister said that his government has flagged skill development and employability enhancement important aspects to open job orbit for youth of Jammu and Kashmir outside the government sector. He said government jobs are not answer to the huge unemployment problem. "We have to create new avenues for youth and enhance their employability to get easily jobs in private sector", he said adding that Udaan and Himayat programmes have been launched to achieve this stupendous target.

The Chief Minister said that during his recent visit to Kolkata, he interacted with the first batch of trainees selected under Udaan for skill upgradation trainings in various trades. "I was pleased to learn that 96 percent trainees have been short listed for permanent jobs in private companies on their outstanding merit", he said adding that the success of Udaan and Himayat is imperative to develop faith in boys and girls in these programmes.

Omar Abdullah said that the boys and girls who have received training under these programmes and are placed in various private companies are the brand ambassadors for youth. "They are watching your success", he said adding that the success of the trainees would attract more and more youth in this field.

Omar Abdullah expressed gratitude to Union Minister for Rural Development for extending support to Jammu and Kashmir all along. "Your unabated support to the State while heading different Ministries at the Central level is praise worthy and we are looking forward for your continuous help to make Himayat a grand success", he said.

Speaking on the occasion, Union Minister for Rural Development, Jairam Ramesh announced enhancement of post placement support for the young boys and girls who have been provided jobs in various companies within and outside the State after receiving training under Himayat programme.

The Union Minister raised the per month financial support from Rs. 1000 to Rs. 2000 per person as also increasing the stipend period from present 2 months to 6 months. Now, each beneficiary will get financial support of Rs. 12000 instead of Rs. 2000 he or she gets at present.

The Union Minister said that his Ministry will facilitate accommodation facilities for youth of Jammu and Kashmir outside the State and involve more and more private companies in the Himayat programme. He said that over 950 trainees were provided job placements in the last similar programme held at SKICC in December 2011 and as many as 600 young boys and girls are being handed over job letters today.

He said a target of imparting training to 7000 youth and facilitating their placement in various companies within the State and outside has been targeted this year. He said IL&FC, Don Bosco, India Can and CAP Foundation are training-cum-placement providers for selected youth under Himayat. He said 2431 youth have been trained in the first two batches.

Jairam assured all possible help from his Ministry in the efforts of Chief Minister, Omar Abdullah in addressing unemployment problem in the State.

Jammu and Kashmir Minister for Rural Development, Ali Mohammad Sagar highlighted the measures taken by the State Government under the leadership of Omar Abdullah to tackle unemployment problem and open new avenues of jobs for youth of the State. He mentioned SKEWPY, Skill Development Mission and other programmes underway in the State to train young boys and girls and enhance their employment opportunities.

He said that attention has been concentrated to make youth of Jammu and Kashmir skilful and trained enough to either launch their own ventures in MSME sector or get easily absorbed in private job market.

The Chief Minister and Union Minister for Rural Development handed over placement letters to 600 boys and girls who have been trained in various trades under Himayat programme.