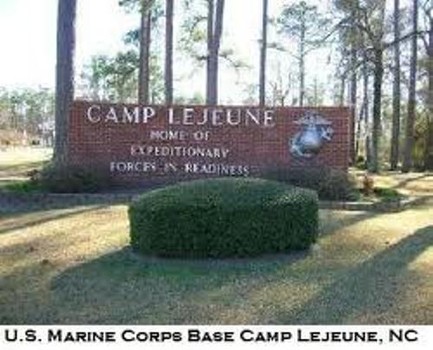 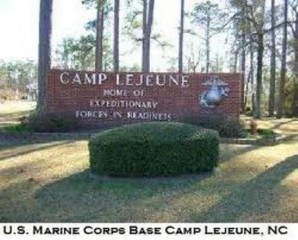 A million people exposed to chemicals at Camp Lejeune, North Carolina. Marines who served from 1980-1993 should seek medical treatment to determine the extent of their contamination to Volatile Organic Chemicals or VOC’s in the water they drank…

Many people may be surprised that water was contamination at Camp Lejeune, N.C. was termed in a Senate report, I stumbled across in 2012 as one of the “largest domestic environmental contamination incident in the history of DOD”…

“Marine Corps base at Camp Lejeune is an active military base located on 236 square miles of land in Onslow County, North Carolina, adjacent to the southern side of the City of Jacksonville”, says Casey Clark of Charlotte, N.C. a private researcher.

According to the U.S. Marine Corps, Camp Lejeune officials in 1980 first became aware of volatile organic compounds (hereinafter, `VOCs’) in finished drinking water (tap water) samples that were being collected to comply with future drinking water standards. After those results were compiled, none of the water supply wells were tested for VOCs.

In January 1982, the Navy Assessment and Control of Installation Pollutants (hereinafter, `NACIP’) Program at Camp Lejeune began to identify potentially contaminated sites on the base.

In 1982 and 1983, continued testing identified two VOCs–trichloroethylene (hereinafter, `TCE’), a metal degreaser used for industrial purposes on the base, and perchloroethylene (hereinafter, `PCE’), a dry cleaning solvent–in two water systems that served Camp Lejeune base housing areas: Hadnot Point and Tarawa Terrace. Base officials stated they did not know the source of these VOCs; water treatment plants and piping infrastructure were investigated as the possible sources, but were eliminated as possible sources in 1983.

Following that “unsubstantiated explanation”, there was no effort to test the water supply wells for VOCs.

That same year, the NACIP initial assessment study was published.

This study eventually led to the sampling of individual water supply wells in 1984. A direct association between VOCs in the Hadnot Point and Tarawa Terrace drinking water and VOCs in the wells and groundwater was established when the water supply wells were sampled beginning in July 1984, but analysis of those samples was not received at Camp Lejeune until November 1984. Officials at Camp Lejeune confirmed the wells were impacted by VOCs in November 1984 and shut them down in late 1984 and early 1985.

Measurements of mixed water samples suggest that supply wells TT-23 and TT-26 were major contributors to contamination of the Tarawa Terrace water supply. The Agency for Toxic Substances and Disease Registry (hereinafter, `ATSDR’) lists 16 wells that served the Tarawa Terrace water supply system. According to GAO, two wells, TT-23 and TT-26, were shut down on February 8, 1985, because of PCE contamination. However, well TT–23 was used briefly after that date–at least on March 11-12, 1985, and on April 22, 23, and 29, 1985. ATSDR indicates that TT-23 was removed from service in May 1985.

According to the National Research Council (hereinafter, `NRC’), which functions under the auspices of the National Academy of Sciences (hereinafter, `NAS’), there were multiple sources of potential pollutants, including 1) an industrial area, 2) a drum dump, 3) a transformer storage lot, 4) an industrial fly ash dump, 5) an open storage pit, 6) a former fire training area, 7) a site of a former on-base dry cleaner, 8) a liquids disposal area, 9) a former burn dump, 10) a fuel-tank sludge area, and the site of the 13) original base dump.

The NRC stated that the contamination for the Tarawa Terrace area appears to have begun in the middle 1950s and continued until the middle 1980s, when contaminated supply wells were shut down.

According to the Marine Corps officials at the time, nine of ten wells taken out of service have been permanently demolished (piping removed and holes filled in).

One well in particular was returned to service in 1993 following multiple clean samples. This well is in service today. Currently, drinking water is checked for VOCs quarterly to ensure water is not impacted.

The National Priorities List is part of the Superfund cleanup process and lists the most hazardous environmental sites across the United States and its territories. It serves primarily for informational purposes, identifying for the states and the public those sites that appear to warrant remedial actions.

Today, Camp Lejeune is still on that list of “super fund” sites, as are approximately 130 other military installations by the way.

In 2009, ATSDR retracted the 1997 PHA after ATSDR acknowledged it had not fully investigated the extent of benzene contamination on the base. ATSDR will reissue a revised PHA and continues to conduct a series of studies and surveys to investigate the contamination of the water system at Camp Lejeune. The most prominent of these is a Water Model, which will synthesize the data from multiple samples of the water and other data in order to map out the most likely dispersion and concentration of the VOCs on various areas of the base. The Water Model and a Mortality Study of former base military personnel are expected to be completed by early 2012. ATSDR also began in July 2011 a Health Survey to be sent to 300,000 former residents of the base, military and civilian.

This survey is expected to be completed by 2014.

At the June 8, 2011, hearing, Jerry Ensminger, a retired Marine Corps Master Sergeant, testified that his daughter, who was conceived, carried, and born at Camp Lejeune, died at age nine after she was diagnosed with acute lymphoblastic leukemia.

Mr. Ensminger, a member of ATSDR’s Community Assistance Panel for its Camp Lejeune studies, indicated that, since 2009, significant new information pertaining to extensive fuel leaks from underground tanks on the base and subsequent benzene contamination had been discovered by ATSDR during reviews of previously unavailable documents and that, in some of those documents, Navy contractors had estimated the magnitude of the fuel losses on the base at close to “one million gallons over several decades”. The ATSDR Water Model will ascertain the severity of benzene contamination in the base drinking water.

VA’s Dr. Jesse testified that “one million people may have been exposed to hazardous chemicals in the Camp Lejeune well water.”

Also of note, at the Louisville, Kentucky, Regional Office, VA has consolidated all disability claims based on exposure to contaminated drinking water at Camp Lejeune from veterans throughout the United States.

A team of VA employees there is tasked with reviewing and adjudicating these claims.

As of the June 8, 2011, hearing, that office had adjudicated 125 such claims and had granted service connection in 22 percent of those cases. That office had another 967 claims based on the contaminated water pending adjudication.

The estimated cost to care for all the Marines and their dependents exposed to the contaminated water will be hundreds of millions and could reach higher.

Anyone who served in the US Marines from 1980-2000 should contact their physician or doctor to determine if their illness and medical conditions are “service related”.

That would include those who attended Infantry school and boot camp at Camp Lejeune where they were given tainted water to drink before, during and after physical training.