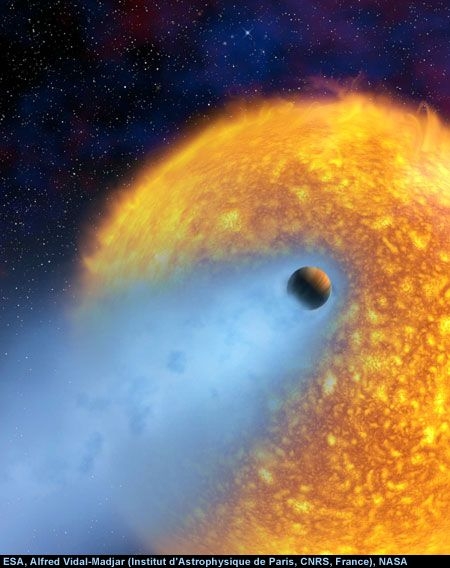 Water vapour has been observed in the atmosphere of a planet in the Pegasus system, as reported by researchers at the Lowell Observatory in Arizona. The planet, HD 209458b (called Osiris by some), seems to be in the process of having a water vapour-rich atmosphere boiled away as it swiftly passes before its parent star. The telltale spectra are observed during transit.   The article by Travis Barman appears in the May 2007 Astrophysical Journal.

However, the discovery is considered controversial. The atmosphere was the first to be spectroscopically viewed by the Hubble Space Telescope (HST) in 2001. Six years later, in February 2007, research by NASA’s Goddard Spaceflight Center and the Jet Propulsion Laboratory revealed an atmosphere full of silica and other elements that couldn’t be accounted for. This new study uses the same data gathered by HST and reaseachers at Harvard to draw different conclusions.

The planet itself is thought to be a gas giant, about 2/3 as massive as Jupiter but larger, because of gaseous expansion. It is located nearer to the star known as 209458b than Mercury is to our own sun. It has proven a very good model for observation because the planet makes a complete revolution every 3 ½ days. Because it is so close to the parent star, Barman theorizes water is being liberated, leaving a trail of steam.

The subject of much speculation, astronomers have searched for indirect evidence of planets outside our solar system since 1855. Since then, the modern discovery of extra solar planets was made and published in 1988 by a Canadian team who inferred the position of the massive, invisible planets from their “wobble” effect on nearby stars.

Since then, over 200 have been found. What seemed like an amazing achievement at the time has become almost commonplace. Some researchers now believe there may be planets of some sort around perhaps 10% of stars in our own galaxy. And, by habitable, they mean able to retain water in some form in an atmosphere.

Life, as we know it, requires water – most likely in the liquid form. While life has been observed in particularly inhospitable areas of Earth such as the sides of active volcanoes and Antarctic ice, it is less likely (though certainly not impossible) that life could emerge under frozen conditions. On Earth, it’s assumed that simple life forms adapted to extreme conditions after forming elsewhere. Most planets are found around stars similar to our own sun, and have a typical lifespan of perhaps 10 billion years. There wouldn’t be time assuming the rate of biological activity follows temperature as it does here.

In liquid form, water is the universal solvent. The unique properties of this simple compound make it the basis for all carbon-based life that has been observed. An atmosphere that contains water could easily condense into rain-bearing clouds is very likely. Until now, even simple compounds have proven difficult to observe.

Of course, the implications of finding water in any form on extrasolar planets sets the imagination in motion. Those who continue to look for water (and other constituent components) outside the solar system do so in an effort to define the parameters by which the chances of there being small, rocky planets and how much water might remain for the other currently unobservable (and perhaps more hospitable) planets in their respective systems.

Research is certain to continue testing to determine which model is correct. As welcome as news of water might be to champions of the search for extra-terrestrial life, it is unlikely that many planets found with current technology will contain such compounds – Osiris may very well prove to be a very unusual example, but it remains eminently observable and the subject of continued speculation.