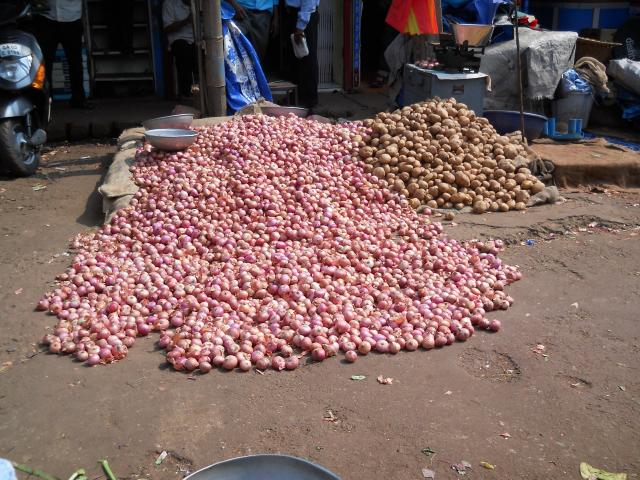 Nearly 2 months later, millions of Indians are still teary eyed, thanks to the high price of onions which is refusing to come down.

Food inflation in India hit its peak in December 2010, with onions being priced at an incredible rate of Rs.90 in some parts of the country. Prior to December the price used to be Rs10-12 a kg. According to the government, the sudden price rise was caused by unseasonal rains from July to November last year that in turn caused two diseases. The diseases – the Purple Anthracnose and Purple Blotch, destroyed massive quantities of onion crops and led to the nation-wide onion shortage.

However, the truth is, despite the diseases, the government did not try to import onions to avoid a  crisis and was rather  caught napping until the price had suddenly shot upto Rs 50 in mid-December.

The soaring cost has already been debated in the media, in state assembly houses and in the parliament. It also caused a near rift in the present multi-party coalition that runs the government when Rahul Gandhi – the Congress leader blamed the price rise on Nationalist Congress Party which holds the agriculture portfolio. Cornered by the sharp criticism, the agricultural minister promised that in no less than 3 weeks the situation would be normalized and the price would come down.

However, even after 6 weeks, onions are still making a hole in the pocket of common Indians. True, the government has taken some steps like selling onions from special mobile shops which has brought some sporadic results. But in most places the price is still Rs. 40 -50 which is still way above the normal rate of Rs.10

While the entire country is grappling with the high cost of its favorite food item, in states like Goa, the price has affected the local business. Since tourism is the lifeline of Goan economy the sudden rise in the price of onion has left the hoteliers grumbling. Rosario Fernandez  runs a beach shack in Calangute –one of the popular tourist destinations. He says that earlier when he sold a plate of chicken Xacuti –one of Goa’s local delicacies- at Rs 80, he could make a profit of about Rs 10. But now he is incurring a loss of Rs 5-10. This is because onion – one of the main ingredients of Xacuti, is costing him roughly Rs 60 a kg. “Our price list is decided well before the tourist season kicks in. Now, the onion price has gone up in the middle of the season and we have no way to recover it”, he says.

The other state to suffer badly is Maharashtra which is ironically one of the largest onion producer states in India.  Most onion farmers had sold their fresh produce at Rs 20 a kg to whole sale distributors in Maharashtra. But now they are spending more than twice the amount to buy the same.  Maharashtra, which is also the home state of the current union minister of Agriculture – Sharad Pawar, feels that it has been let down by the minister. Will the ire of the onion farmers affect the minister’s political future? Time will tell!