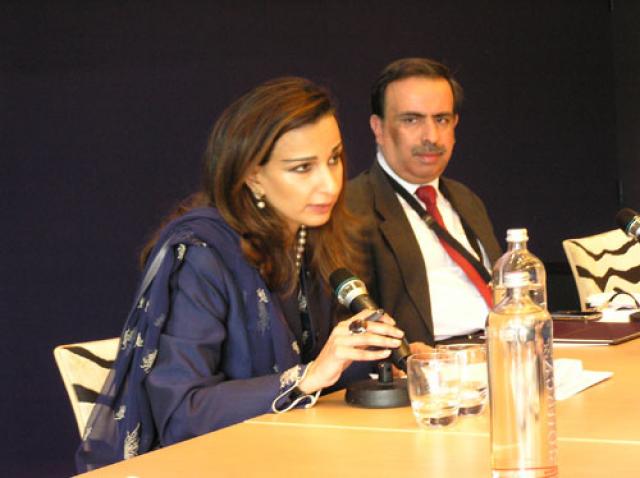 The former Pakistan minister for Information and Broadcasting, Ms Sherry Rehman, said that only a democratic Pakistan can be a stable Pakistan. Ms Rehman attributed most of the current problems of Pakistan to long periods of military rule.
Ms Rehman said this while delivering the Dorothy Hodgkin Memorial lecture at The Hague. The lecture was titled “Strategic Challenges before Pakistan” and was chaired by the renowned intellectual and peace activist of the sub-continent, Professor Amitabh Mattoo.
The Dorothy Hodgkin memorial lecture is held in the memory of the scientist who won a Nobel Prize for her work in chemistry and campaigned throughout her life for peace and disarmament. Sherry Rehman is a Member of Parliament in the National Assembly of Pakistan from the Pakistan Peoples Party for her second term. She has served as Federal Minister for Information and Broadcasting Pakistan (2008-09). Rehman also held three additional portfolios of Health, Women Development and Culture as federal Minister
In her lecture, attended by hundreds of intellectuals, activists and analysts from throughout the world, Ms Rehman also stressed that India-Pakistan friendship was essential if the sub-continent was to realise its true potential, and regretted that the dialogue between the two countries had been suspended. As a committed campaigner for the Indo-Pak peace process Rehman led the first parliamentary delegation from Pakistan to visit India in 2003 after which she has led many PPP delegations to India. As part of her public agenda against extremism in religion, she has lectured widely on the regional and international circuit for Pakistan’s democratic institutions to be empowered for advancing the cause of regional peace.
Ms Rehman argued that although Pakistan was currently facing the worst crisis in its history, the civil society of Pakistan together with other saner elements would ensure that the country would be able to emerge stronger after this unprecedented period of turbulence. Ms Rehman pointed out that she although had been personally opposed to the deal in Swat with the Pakistan-Taliban, but tactically it is sometimes necessary to make short-term concessions,
Professor Amitabh Mattoo, in his Presidential remarks, pointed out that Pakistan’s stability is in India’s vital interests. He regretted the fact that New Delhi seems to have outsourced its policy towards Pakistan to the United States. Professor Mattoo argued that New Delhi must pro-actively strengthen the peace constituency in Pakistan and hoped that the new government, after the general election will make Pakistan a priority issue. He congratulated Ms Rehman for her personal courage and commitment.
Sherry Rehman’s book on ‘Five Hundered Years of The Kashmiri Shawl’, has been published in 2006 by Mapin India and Antique Collectors Club UK. It has won an award in 2007 from the Textile Society of America.