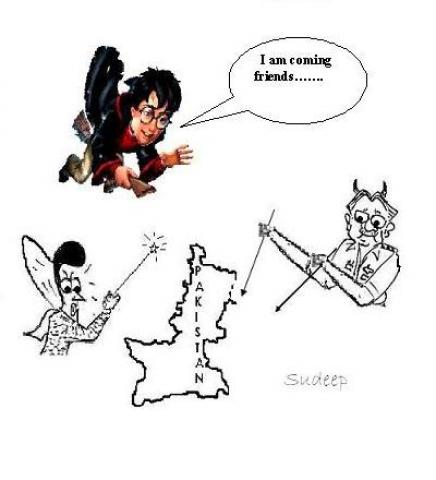 The school children of Pakistan urge that their hero Harry Potter only can save their home land. And they see the two Pakistani leaders President Pervez Musharraf as Lord Voldemort, the villain in J.K. Rowling’s hugely popular Harry Potter series, and former Premier Bhutto as Umbridge, an “evil witch” who gave Potter a tough time at the Hogwarts School of Wizardy. The students, who were aware of the imposition of emergency told to their teacher that only Harry Potter could save Pakistan. “What distresses the students the most is the absence of a character like Dumbledore, the great wizard”, one of the teachers said. My students may be young but its heartening to learn how well informed they are”, Sehar Rizvi, a seventh class teacher told. A 12-year old student claimed that Musharraf and Voldemort are similar because both “supported militancy”. The students compared the President’s take over with Voldemort and death eaters. Though the students could not find a Harry Potter in Pakistan, sacked Supreme Court Justice Iftikhar Chaudry came closest to being the wizard, and the protesting lawyers were seen as Potter’s friends.

Filed under: Opinion, World
Share Tweet Pin G Plus Email
previous article: How Coffee Works!
next article: The Most Expensive Dessert in The World!