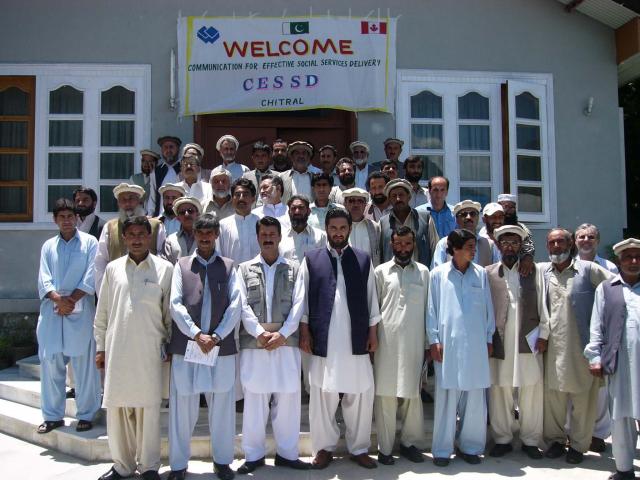 CHITRAL: Orientation regarding initiative and formation of NWFP Local council Association (LCA) held here in a local hotel organized by Communication for Effective Social Services Delivery (CESSD) NWFP. The program was started with the recitation from the Holy Quran by Qari Jamal Abdul Nasir. District Nazim Chitral Haji Maghfirat Shah was chief guest on the occasion stressed upon the stake holders for delivering services to community in his welcome address. He stressed upon the stake holders to must initiate and frame the association for long term and sustainable development of Chitral.  He thanked CESSD for initiating this workshop regarding awareness raising regarding this association and  said that Chitral is a peaceful district but still suffering a lot of problems due to trouble and tense in neighbor district situating on its border. He said that although we have very limited resources but district government of Chitral will leave no stone un-turn to serve the people.

He said that the case of withdrawal of subsidy on some items like wheat, oil, petroleum is under process and it will be difficult for Chitrali people to survive because majority of the area comprising over poor people. And they purchase these things on subsidize rates if it was withdrawn they will be face great difficulties. He said that due to tense situation in Malakand Division it is not feasible to celebrate and jubilate Shundoor festival at a large scale because our brethren were displaced in our neighbors districts  hence the polo matches would be played in an other plate form alternate of Shundoor festival. He said that we will use an other platform for this purpose to convey our grievances and demand to the federal as well provincial government to not withdraw subsidy on essential goods at Chitral and Chitral may be exempted from this policy and criteria.

Muhammad Khaliq Governance Advisor of CESSD briefed the stake holders regarding formation and associating the local council association for solving problems of the area through gross root level. He said that the association was first introduced at and running very successfully.  He said that due to this system implementation of local government system will run very transparently and smoothly. He said that CESSD working in 7 districts of NWFP and will be extended to other parts of the province. Kamal Abdul Jameel district coordinator briefed the participants about the aim and objectives of the program. Mr. Ivan Gyozo Somlal a Canadian citizen and Project Manager highlighted different aspects of the association in his presentation quoting examples of this system in some other countries like , Nepal etc. he said that by this way the association will enable to gain fund from abroad for facilitating and solving problems of the people. A question Answer session was also held at last of the session. The program was concluded with praying words of Maulana Abdul Shukoor Naib Nazim union Council Broze. A large number of councilors, Nazimeen, representatives of civil societies participated in orientation workshop. A facilitation committee would be framed to select members of local council association in district within one month.