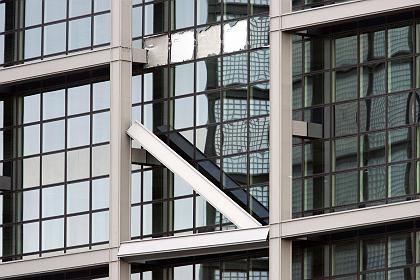 A two-ton steel girder fell 40 meters to the ground from the faÃ§ade of Berlin’s new central train station on Thursday night during a severe storm. Although nobody was injured, questions remain about the building’s safety.

The powerful storm "Kyrill" didn’t just result in cancelled trains and stranded passengers across Germany and Europe. It also caused major damage to Berlin’s brand-new central train station in the heart of the city.

A two-ton steel beam fell off the train station faÃ§ade onto an outdoor staircase 40 meters (130 feet) below on Thursday evening. A second girder likewise came loose but settled on the beam just below it. The entire train station was shut down and remained closed to passengers for 14 hours, though nobody was hurt in the incident. Service resumed at 1:30 on Friday afternoon.

However the question as to how a major chunk of a modern, newly-built structure could simply fall off remains unanswered. On Friday morning, experts from the German national railway and the construction firm which built the station inspected
the building to determine its safety. The first order of business was to determine whether the faÃ§ade was in danger of shedding more of its steel girders.

The head of the German railway – Deutsche Bahn, Hartmut Mehdorn told reporters that the cause of the accident remained unclear. Much of German train travel was shut down on Thursday evening due to the ‘Orkan’ "Kryill", which battered central Europe. A train in northern Germany collided with a downed tree lying across the tracks, luckily no one was injured.

The building, finished just before the World Cup in the early summer of 2006, is Deutsche Bahn’s flagship. Constructed largely out of steel and glass, it is vast and open on the inside.

Problems have plagued the building from the very beginning. On the night it was officially opened in late May, a man stabbed 28 onlookers watching the fireworks display. At the end of November, architect Meinhard von Gerkan won a lawsuit relating to design changes made by Deutsche Bahn against his will. The lawsuit may result in parts of the station being rebuilt at an estimated cost of â‚¬40 million.

Filed under: World
Share Tweet Pin G Plus Email
previous article: The Public Art of San Francisco
next article: Armageddon and You