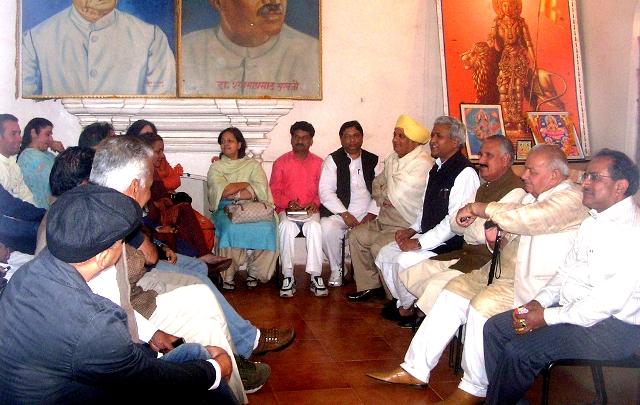 .
Jammu, November 12 (Scoop News) – BJP National General Secretary Ram Lal, said that there is strong resentment against the Jammu and Kashmir chief minister for his statement on the issue of accession. He said that it is a permanently settled issue and no one has any right to raise question over its finality.

Ram Lal said that has always been the core issue for BJP and we have made numerous sacrifices during the last 63 years. This state is the crown of and we all stand committed to ensure its complete integration with the rest of the country. It is the prime duty of BJP to oppose all such forces which raise question over the accession or pose threat to the unity and integrity of the country. He said the BJP at the National level also has been watching the developments in J&K very minutely and our cadres through out the country are with the peole of .

BJP State President Shamsher Singh Manhs, apprised the national leader of  different programmes being undertaken by the party in different parts of the state during the last three months. He said that besides routine programmes, the party launched massive public awareness campaign to educate the people about the utterances of state chief minister and the historical facts of accession by Maharaja Hari Singh. He said that the party will further intensify its campaign in the coming days. The chief minister should withdraw his statement or he should be sacked for making anti-constitutional statements.
The party leaders attending the meeting suggested a number of measures to be adopted for reaching the masses to expose the NC-Congress coalition in the state and the Congress led UPA at the Centre for their such policies which are not in the interest of the nation.