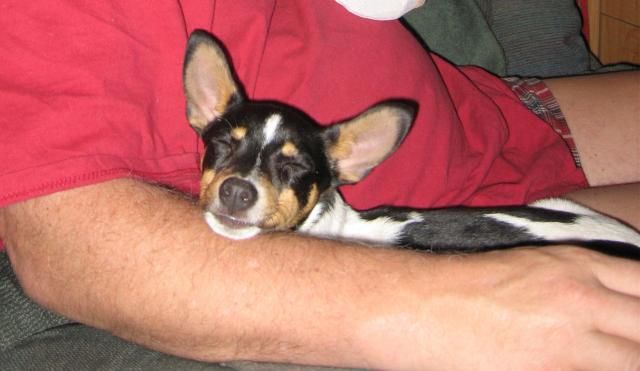 We already had six other dogs. Granted they were small dogs, but, still, their number added up to six!

Then, a month ago our daughter, who had recently moved into a new house, called us in crisis.
“Mom,” she said. “We have a problem. Max almost drowned in the backyard pond. Do you think that you could keep him for us?” Max was their new puppy.
Of course we could keep him.  What was one more dog among six?
They brought the dog over that afternoon.  The grandkids were sad to let him go, but our house was better than a stranger’s, and they could visit their dog whenever they wanted. The deal was sealed.
Max was supposedly housebroken, which proved not to be the case. As soon as our daughter’s car had pulled out of the driveway, Max took a big dump on our light blue carpet. I was shocked that so much poop could come out of such a little dog! We’d have to teach him to do his business outside.
He also chewed. Within a day, Max had chewed my slippers into mangled pink pulp and gnawed on pretty much anything he could sink his razor-sharp puppy teeth into. Max also had a problem with aggression towards our other dogs when food was involved and would jump onto the back if whichever dog was eating and proceed to latch on. This caused some major upheaval in our little habitat, but Max is now cured of that.
I guess that he had begun to grow on us because recently I realized that Max is really smart and has some very endearing qualities. He can play fetch and he’s very agile on his feet. He likes to sleep draped across the back of my husband’s neck as he is sitting in his easy chair. Gradually, Max will begin to slip, head down, towards the arm of the chair, inch by inch as he is sleeping.   When he finally slides into it and bumps his head, he wakes up.
Max has the funniest little bark that sounds like, “Rar, Rar, Rar,” and he barks this way when he’s ticked off. Max sleeps between my husband and me at night in our bed and feels like a heat-generating little lump.
Last night as I was watching the Eukanuba Dog Championships on television, in the Toy Category I saw him. It was our dog!  That’s when we learned that Max is a purebred. Our daughter had told us that Max was a full breed “something or other” Terrier, and he actually is. Technically, he is a Toy Fox Terrier aka American Toy Terrier. I looked up the breed on the American Kennel Club web site and learned that the Toy Fox Terrier is a rare breed that is intelligent, alert, friendly, and loyal to its owners. He learns new tasks quickly, is eager to please, and adapts to almost any situation. The Toy Fox Terrier, like other terriers, is self-possessed, spirited, determined and not easily intimidated. He is a highly animated toy dog that is comical, entertaining and playful all of his life.
Even though our little Max bumped up our dog population to seven, we’ve grown hopelessly attached to him and have decided that he is a keeper.
And he is absolutely the last dog that we are adopting!
Filed under: Lifestyle, Music & Film
Share Tweet Pin G Plus Email
previous article: US Crew Ship Rescued
next article: Assembly-Committee