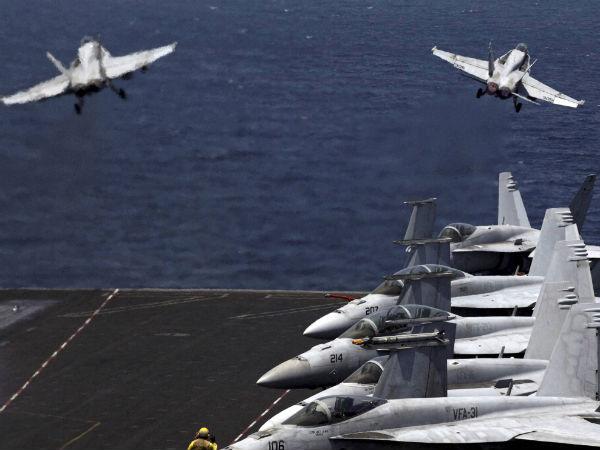 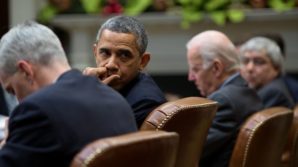 President Obama – the reluctant Commander in Chief – in the White House situation room.

“My fellow Americans — tonight, I want to speak to you about what the United States will do with our friends and allies to degrade and ultimately destroy the terrorist group known as ISIL.”

The President then made some remarks about Iraq, al-Qaeda, Afghanistan and the draw down of troops. He then refocused on ISIS saying:

“Now let’s make two things clear: ISIL is not “Islamic.” No religion condones the killing of innocents, and the vast majority of ISIL’s victims have been Muslim. And ISIL is certainly not a state. It was formerly al Qaeda’s affiliate in Iraq, and has taken advantage of sectarian strife and Syria’s civil war to gain territory on both sides of the Iraq-Syrian border. It is recognized by no government, nor the people it subjugates. ISIL is a terrorist organization, pure and simple. And it has no vision other than the slaughter of all who stand in its way. In a region that has known so much bloodshed, these terrorists are unique in their brutality. They execute captured prisoners. They kill children. They enslave, rape, and force women into marriage. They threatened a religious minority with genocide. In acts of barbarism, they took the lives of two American journalists — Jim Foley and Steven Sotloff.”

“So ISIL poses a threat to the people of Iraq and Syria, and the broader Middle East — including American citizens, personnel and facilities. If left unchecked, these terrorists could pose a growing threat beyond that region — including to the United States. While we have not yet detected specific plotting against our homeland, ISIL leaders have threatened America and our allies. Our intelligence community believes that thousands of foreigners — including Europeans and some Americans — have joined them in Syria and Iraq. Trained and battle-hardened, these fighters could try to return to their home countries and carry out deadly attacks.” 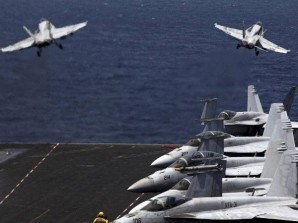 Fighter jets take off to hit ISIL targets in Iraq.

“I ordered our military to take targeted action against ISIL to stop its advances. Since then, we have conducted more than 150 successful airstrikes in Iraq. These strikes have protected American personnel and facilities, killed ISIL fighters, destroyed weapons, and given space for Iraqi and Kurdish forces to reclaim key territory. These strikes have helped save the lives of thousands of innocent men, women and children.”

“Our objective is clear: we will degrade, and ultimately destroy, ISIL through a comprehensive and sustained counter-terrorism strategy”, said President Obama.

Behind the scenes lawmakers in Congress have already quietly began the preparation to authorize the total destruction of ISIS. An effort began approximately 8 days ago.