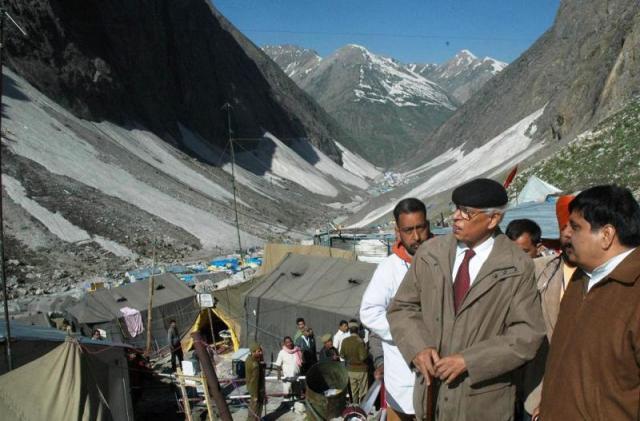 Srinagar, July 13  – According to a Spokesperson of the Shri
Amarnathji Shrine Board(SASB), the Yatra to the Holy Cave Shrine of Amarnathji is going on smoothly.

He stated that more than two lakh sixty thousand pilgrims have gone to the holy cave for darshan of Shivlingam from 16th of June this year where from the Amarnath yatra commenced.

Meanwhile Amarnath yatra  from Chandanwari route to the holy cave has been  temporarily stopped on Monday morning due to overnight rain. However, thousands of pilgrims left for the holy cave from Baltal base camp on Monday morning. and 8662 pilgrims performed darshan on Sunday, Spokesperson said. Out of 8,311 pilgrims, who gave presence in holy cave on Sunday, 6,315 yatris reached back to Baltal while as rest of the pilgrims are on their way from Pahalgam route.

According to spokesperson of SASB, The Shri Amarnathji Shrine Board (SASB) is likely to declare the schedule for Yatra-2010 soon after this year’s Yatra comes to close. This will enable the Board, the service providing Departments of the State Government and the stake-holders in the pilgrimage to undertake advance planning and ensure the required arrangements for a well regulated Yatra next year.
This was indicated at the 17th Meeting of Shri Amarnathji Shrine Board (SASB), held here with the Governor,. N. N. Vohra, in the Chair.
The Board reviewed the status of the ongoing Yatra and the various other measures taken for ensuring the smooth conduct of the pilgrimage via both the routes of Pahalgam and Baltal.
The Governor, who is Chairman of the SASB, informed the Members about the adverse weather conditions in early June this year which necessitated rescheduling of the Yatra from 15th June via Baltal and 26th June from the traditional route of Pahalgam. These decisions, he added, had to be taken in the larger interests, to ensure the safety and security of the Yatris undertaking the arduous journey.

The Governor observed that the experience gained during the ongoing Yatra will help in devising newer strategies for fine tuning various facilities for the next year’s Yatra at the Base Camps and enroute the Cave Shrine. He added that major policy reforms are required with regard to the establishment of free langars, shops and tents during the Yatra. Stressing greater involvement of the various stake-holders in order to ensure participation of all segments of the society in the Yatra, which has remained a shining symbol of the pluralistic ethos of the State, the Governor indicated that the Board shall take steps to further streamline the system of registration of Yatris for making the process easy, accessible and more productive.