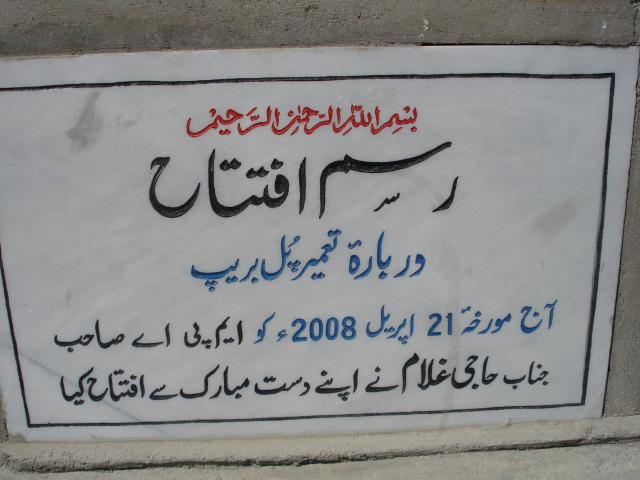 ISLAMABAD: The government’s failure to reconstruct a bridge in a far-off valley of Chitral has left its over 40,000 residents stranded for the fourth consecutive summer this year.

The bridge on the Yarkhoon River near Khotanlasht was constructed in 1980 but it collapsed in August 2006 due to lack of maintenance cutting off the over 100-km-long valley of over 50 scattered villages stretching up to the Boroghil Pass bordering the Wakhan corridor of Afghanistan.

As a result, the area has been nearly facing a crisis in the absence of supplies of essential commodities and basic healthcare facilities. Ironically, there is even no basic healthcare centre in the entire valley and a dispensary set up in the Dizg village was also closed down a few years ago. The worse affected are patients needing emergency medical treatment including aged people, women and children. Besides, due to absence of transport, people have to travel on foot from the destroyed bridge to reach their villages and vice versa.

Hundreds of students including girls from the four villages near the collapsed bridge have to attend their schools situated in Brep village across the river. When the bridge collapsed, they remained out of school for three months till a pedestrian bridge was set up at the site. Crossing the dangling and quite long suspension bridge is like playing with one’s life. Early in the morning and in the afternoon, crowds of students can be seen on the bank of the river waiting for their turn to cross the bridge one by one, as the bridge is also used by other people and for shifting of luggage, etc. The residents said they had been going through mental distress and were also concerned about the safety of their children. One person has already lost his life while crossing the river.

Though the reconstruction of the bridge could take hardly one or two months, too many political stakeholders have complicated the matter to achieve their own vested interest making the residents suffer. As the area is far off and has no communication links, the affected people’s pleas after pleas for resolution of the problem have fell on deaf ears despite the fact that their political representatives had made promises to reconstruct the bridge on many occasions.

During the last about three years, every political party hoodwinked the people and sent contractors to the site who carried out some groundwork that too by fits and starts and then disappeared. So far, work on the project has been started and closed for fourth time but there is no hope that the work presently going on at a snail’s pace at the site would be completed any time soon.

When the bridge was washed away, the then provincial government of the Muttahida Majlis-e-Amal (MMA) deliberately put the project into the cold storage and did not release the required funds on time. However, MMA’s successors in the province turned out to be more callous and did the same with the project. In the 2008 elections, the Pakistan Muslim League-Quaid (PML-Q) candidates Shahzada Mohiuddin and Ghulam Mohammad returned to the national and the provincial assemblies mainly through the votes of the Yarkhoon Valley after promising to reconstruct the bridge as a priority project. But after reaching the assemblies, these two leaders have also been buying time on one pretext or the other. Instead of ensuring the reconstruction of the bridge, the MPA made it a publicity opportunity and proudly opened a plaque in his name on April 21, 2008, declaring that work on reconstruction of the bridge has been started. Had there been political will to resolve the public issue, the bridge would have so far been reconstructed, regretted the residents.