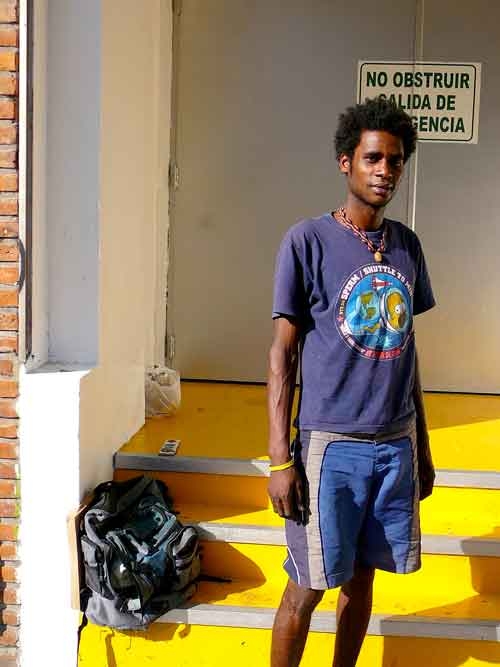 La Plata, Argentina —  “Beautiful, no,” he asks in his thick, Portuguese accent.

Oziel, a Brazilian immigrant who has been living in Argentina for four years, has been working on 12th street for about a year now.

His work, he’s an artist who paints scenes of forests, beaches and lakes onto glazed tiles, is spread out on a thin cotton blanket covering the sidewalk, backed against the brick wall of the grocery store.

Hunched in the corner of a Carrefour stairwell where he sits most daylight hours, his backpack tucked under his skinny legs, Oziel’s head is bowed to the task of helping a young child wrap silver plastic around a carnation he’s about to sell.

Nearby, a family slings flowers and bootlegged DVDs, the latest from Hollywood.  Passers-by on the bustling commercial street frequently stop and search through the titles, their heads glued to the sidewalk, temporarily causing blockages.

Quick to his feet with a smile, he starts in on his pitch.  “I also do drawings, of Gauchos and horses, and write poetry.  I can do portraits, anything.”

Tight locks spring from his thoughtful brow.  His eyes are bleary, but he has an upbeat, searching expression that charges the atmosphere around his little corner of the world.

Despite his penury appearance, his manner is unperturbed.

It’s a part of modern life.  Every day, people on the verge of starvation, in crisis or in the midst of war, are driven from their homes to look for greener pastures abroad, moving out of the country and into the city.  When life is no longer stable, they learn to improvise.

Argentina is no different.  Though unemployment here is high, official numbers are around 12 percent, it is a beacon to some of its impoverished neighbors.

Immigrants from Bolivia, America‘s second poorest nation, Uruguay and Peru come to find work picking Argentine’s fruit, making their clothes and cleaning or building their homes, if they are lucky.

“At night, I’m on Eighth Street,” he says over the shouts of some children across the street who are calling him.  “And on the weekends, Plaza Italia.”

Filed under: World
Share Tweet Pin G Plus Email
previous article: Plight of women in NWFP
next article: The Socialist EU on the rocks