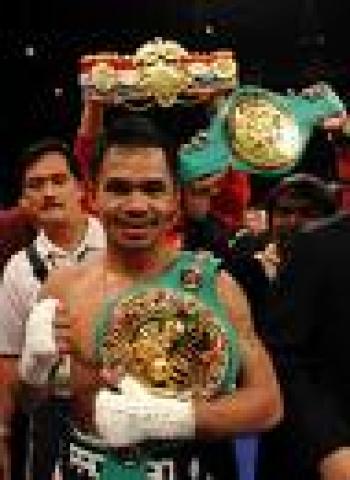 Tacloban City, Philippines – Pound for Pound King Manny “Pacman” Pacquiao will give a 1 Million peso (US$ 20,595) incentives to the athletes of Region 12 who will win in their respective events in the Palaro 2009.

The people’s champ Manny Pacquiao is in the United States now, which is to say in the zone of fight time, for his bout with Ricky "The Hitman" Hatton on Sunday, May 2 at MGM Grand Garden Arena in Las Vegas.

In a report of Philippine Information Agency Region 8, the Department of Education Region 12 Assistant Regional Director Allan Farnacio was quoted as saying that the secretary of Manny Pacquiao called up the Region 12 delegation to relay Manny’s good luck wishes and to inform about the 1 Million pesos incentives which Manny will send to the athletic delegation.
Manny’s incentive seem to have a great impact on the Region 12 athletes as Omar Dacerra, a sixth grader from Notre Dame of General Santos broke a Palaro record in the swimming event particularly in the 200 meter free style for the elementary boys.
The Region 12 swimmer recorded a 2.10.34 which broke the old record of a National Capital Region swimmer of 2.11 in Palarong Pambansa in Palawan last year.
During the Solidarity meeting, Region 12 Director Luz Almeda vowed to give cash incentives to the gold medalists in the delegation.
It was observed that the first ever recognition for Region 12 is their well-applauded “Saludo” during the formal opening of the Palarong Pambansa on April 28.
With the high spirited and well-motivated Region 12 athletes, the delegation of the Cotabato Regional Athletic Association in blue and yellow striped uniforms is optimistic that it will inch its way surely to more wins and recognitions.
Among the inspiring fete of the Region 12 delegation is an outstanding athlete, Domingo Cabradilla, an 18 year old lad from the Tuna Capital of the country, Gen Santos City who got silver medal in long jump earning him some 5 points.
An early gold was captured by John Albart Mantua, in the shot put event for secondary boys.
Another impressive performance was observed in athletes John Rey Miguel, Jerome Magna and Nomer Buenavente who earned 30 points in arnis and placing second only to Western Visayas.
Filed under: Sports
Share Tweet Pin G Plus Email
previous article: Gay Rights Debate Could Possibly Head Over To New Hampshire Soon
next article: Metal Services Celebrates First EPBL Championship