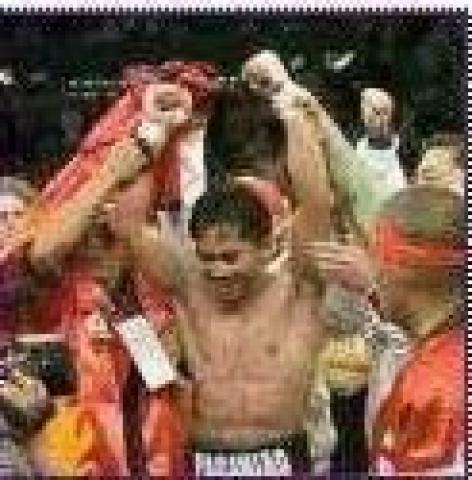 The much-awaited boxing match between Manny Pacquiao of the Philippines and Ricky Hatton of England has been called off by the Hatton camp.

The two camps failed to agree on the revenue sharing as proposed by the Hatton camp. The Pacquiao camp wanted a 60-40 sharing of revenues but the Hatton camp said that they are sticking to the 50-50 split sharing they claimed was agreed upon earlier between Bob Arum and Golden Boy promotions.

Earlier the Pacquiao camp appeared ready to settle at 55-45 sharing but the Hatton camp did not bite. The other Day Arum announced that he was able to arrange a 52-48 sharing of the revenues from the fight, saying that the Pacquiao camp was almost agreeable to the proposal.

Inquirer.net; ‘Richard Schaefer, chief executive for Haton backers Golden Boy Promotions, told ESPN and the Los Angeles Times that the bout was called off by Hatton after Pacquiao would not sign a deal by Wednesday deadline.

‘The fight is off, Schaefer told ESPN. ‘We are pursuing our other options. That’s it. The Hattons called me and asked again if we had a signed a deal from Pacquiao and when I said we didn’t, they said they won’t sit around anymore.

Bob Arum, the promoter of Pacquiao fights said that Manny Pacquiao wanted more money and bigger share of the profits.

‘Manny decided not to sign. He was unhappy with the terms. Arum told the ESPN. ‘The fight is off’. The suits can posture but it’s the fighters who have to go to the ring and fight. But I am not thrilled right now’.

Some boxing fans in the Philippines said that the controversy generated by the Hatton hard-line approach to the sharing arrangement where they claimed that Pacquiao had agreed verbally on the 50-50 sharing, is just being played in the media to get more mileage in terms of promotions aimed at generating public awareness of the super fight.
They maintained that the contract will be signed shortly on the terms acceptable to both parties.

Pacquiao is traveling to the USA this Friday in time for the Mosley-Margarito fight which is scheduled at the Staples Center on January 24th. He said he is watching the fight