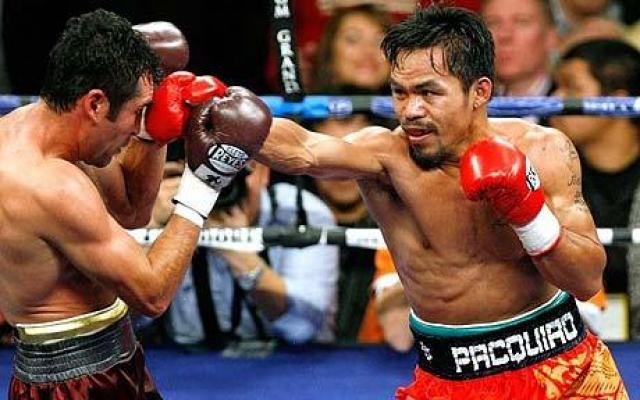 Attack, attack and attack again. That’s what Ricky Hatton will do when he finally squares off with Manny Pacquiao on May 2, 2009.

Ricky Hatton has been consistent with his statements when asked by reporters how he intends to fight the pound-for pound king.

"We are both very aggressive and both like to go forward but ultimately my size and power will be a factor.

"But it is not just a power thing; I’m working on my speed. I think they see me as a slow fighter and they will get a shock on the night just how fast I can be.

"I’ll be keeping the same ferocity I have always had and when he feels my strength I don’t think Manny will stand about.

Hatton’s trainer, Floyd Mayweather, Sr. has been talking about Hatton’s awesome punching power and boxing fans agree with him. But Hatton must outlast Pacquiao’s speed in order to find his target. If he maintains his natural speed, he will be at the receiving end of Pacquiao’s lethal punches.

Hatton has repeatedly said that he will surprise Pacquiao with his added speed. He admitted that Pacquiao is speedier but he explained that he and trainer Floyd Mayweather have developed a new strategy to out speed him and that will spell the difference.

Hatton knows that speed will determine the winner of the match. And this is the reason why he is concentrating on developing a strategy to match if not surpass the speed of Pacquiao. But the real question is: Can he be speedier than Pacquiao when he climbs the ring on May 2?

First and foremost is that both of them are speed boxers. But the next question is: who is speedier? If Pacquiao can also develop a new strategy to likewise increase his speed, then Hatton will have a lot of catching up to do. In the end he will end up with the same speed because he has to catch up to added speed of Pacquiao and it would be a tough job for him.

The speed factor will determine the winner of the Pacquiao-Hatton fight. But then again, speed is a natural quality of any boxer, a quality that can only be improved to a certain extent just like in other sports like swimming and speed running.

In the speed department, the new strategies being developed by the respective trainers will not really matter much because both of them will end up with the same speed.

For Pacquiao to win in this much anticipated match, he must outlast Hatton by running to avoid his forward bulldozing stance. Hatton is very dangerous in the first three rounds and Pacquiao should avoid him by running and dancing around the ring. If Hatton catches him in the early rounds, Pacquiao will find if very hard to withstand Hatton’s’ follow ups and killing instinct.

"We are only halfway through the training camp, there are six weeks to go and I think a lot of fighters would be happy with my speed, sharpness and timing come fight night," added the 30-year-old Hatton