Right now we’re still smoothing out bugs and working on a user interface that will be even prettier and more usable. In the meantime, we think it can’t hurt to start spreading the word and contacting people who could gain a lot from GroundReport.com. Who should use GroundReport? Everyone. Here are a few ideas to […]

Welcome to GroundReport.com, a groundbreaking news site slated to launch in late 2006. In the open spirit of GroundReport, we’ve decided to throw open our doors and let you take a look around. We’re going to be writing periodically to keep you in the loop on what’s going on at GroundReport. First, here’s what you […] 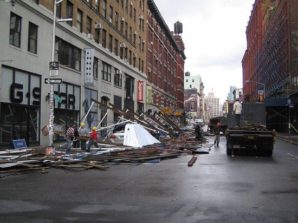 An enormous scaffolding collapsed on Lafayette Street on Saturday, just north of Prince Street. At least three vehicles were very severely damaged and the police cordoned off the area for hours while crews worked to clear the debris. The crash occured sometime between 5:00 am and noon on Saturday, probably as a result of the […]

Last night I finished "The History of Love" by Nicole Krauss. If you like quirky, emotionally resonant novels, I endorse it whole-heartedly.

<p style="margin-bottom: 0cm;">&nbsp;</p> <p style="margin-bottom: 0cm;">About a week after one of those what-are-you-doing-after-all-these-years email drops into the basket, I find myself struggling for an answer. Would that I had a neat one-liner of a career! Engineer! Marketing manager! Drug-addled whore! Cop! Dropout and copout! None-of-the-above is ticked with a tut-tut and I tinkle at keyboard […]