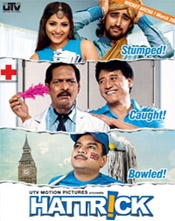 While the Cricket World Cup tournament is in full gear, where hat tricks are imminent, Indian film director Milan Luthria is up to scoring another sort of ‘Hat Trick.’ In his new movie, Luthria’s concept of hat trick is not getting three wickets in three consecutive balls as in cricket, but about 3 successes of […]