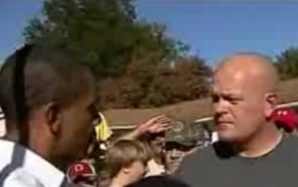 Who is Joe Wurzelbacher? If you don’t already know the name, you will soon. In tonight’s final presidential debate, Senators Barack Obama and John McCain referred to ‘Joe the plumber’ no less than 26 times.  Given far-reaching issues of global economic downturn, energy crisis and resolving healthcare for 300 million Americans, it was unusual that […]

Thousands of Iranian-Americans gathered on Tuesday outside the U.N. Building to condemn the terrorist attacks in New York City and New Jersey and to protest the visit of Iranian president Hassan Rouhani.  The protest took place on the opening day of the U.N. General Assembly. According to the Organization of Iranian-American Communities (OIAC), the demonstrators are […]

Before I stick my neck out on this one, I should make some disclosures. I have no connection with Penn State. However, I am a graduate of Brooklyn Prep and Joe Paterno is arguably the most famous of our alumni. I played sports in college but I sometimes think that “major” sports have been overhyped […]

On June 17, 2014 Rep. Joe Wilson of South Carolina asked for and was granted permission to address the United States House of Representatives for one minute regarding Iraq and terrorism: “Mr. Speaker, as Islamic terrorists seize control of major Iraqi cities, it is clear that the President’s failure to secure a status of forces […]