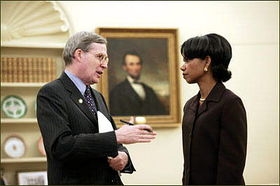 Was the now-notorious Hadley Memo a White House ploy that backfired or another Bush-league blunder? Either way, it leaves the United States with diminished clout and prestige while the Iraq fiasco worsens daily. Leaked by what the New York Times described as “an administration official,” the memorandum written by National Security Advisor Stephen J. Hadley […]