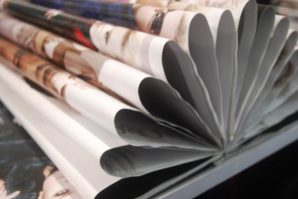 I do believe that a good journalist is always a learner. When a small publication approached me to edit a women magazine, I had taken the advice of eminent media watchers. They send me feed backs after studying the segment. They advised me that since yours is a small size magazine, publishing on a shoe-string […]

by Matthew L. Schafer Note: This report originally appeared on the media blog Lippmann Would Roll. In February of 1996 USA Today called the Internet an “Electronic Pandora’s Box,” the Star-Tribune wrote that the public was “selling their privacy,” and today the Los Angeles Times conceded that most Internet users are painfully aware that “they […]

Six months from now, Wikipedia will celebrate its ten year anniversary. Before Wikipedia, most people either went to the library or collected expensive hardbound copies of the Encyclopedia Britannica. On January 15, 2001, Jimmy Walles and Larry Sanger officially launched Wikipedia. The two were working on an online encyclopedia using only expert-written articles called Nupedia, […]

Between online activists, citizen journalists, and street demonstrators, the cause lost it’s purpose and the internet turned into a soundproof room for cursing and cussing. Sami Ben Gharbia was among the first to cover Egypt’s Facebook activism   Banners from Egyptian Facebook groups calling for Strikes.   After little less than a month following the April 6 strike in […]

To continue the series of harassing or deporting journalists in Egypt, like Travis Randall, Philip Rizk and Wael Abbas; Per Bjorklund, a Swedish journalist and blogger has been detained in Cairo airport upon his arrival. He’s been stopped by security and is to be deported back to Prague without an explanation; he was only told […]