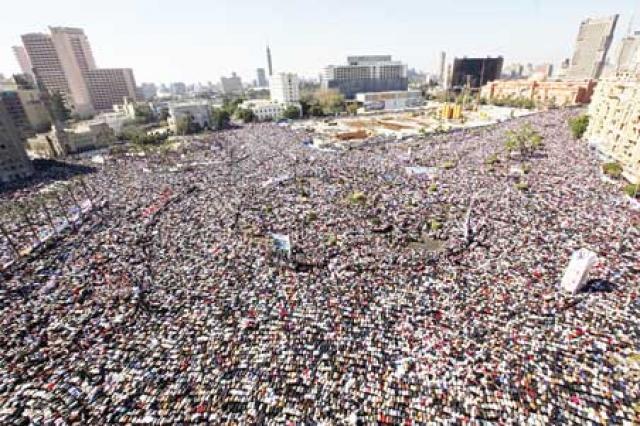 This is certainly the best time for News outlets especially in Pakistan. From Asia to the Americas, every minute is bringing breaking news. On one side a  wave of Pro Democracy  protests and so called revolutions are  taking place in Arab Countries, and  on other , there is news of ongoing talks  between Taliban and US; and of course fresh  updates  on Pakistan US relations vis-à-vis  Raymond Davis and relations between US and Pakistani  intelligence agencies. And one can surely not ignore the Cricket world cup going and the “Power Cup” between PML N and PPP.

The Pro Democracy protests started in Tunis and forced tyrant Zainulabideen bin Ali to flee then made their way to Egypt, expelling the Mubarak regime, and have now infiltrated Yemen, Lybia and Bahrain. From Happenings in Lybia it’s clear that within a few days LYBIA will be freed from the  Qaddafi Government and a new Pro West democratic regime will take control (so far we don’t see any sign of leadership) or Lybia faces the threat of either being divided or governed by a new, UN, transitionery  government.

The Most important development which has potential to alter the geopolitics in Middle East, south Asia and central Asia is situation and outcome of the crisis in Bahrain.

Bahrain is a   small oil rich kingdom located on the western shores of the Persian Gulf ruled by a Khilifa dynasty. It is approximately inhabited by 70 % Shiite and 30 % Sunni Population. The ruling Khilifa regime follows the Sunni Islam and has a strong support base in the form of its neighbor, Saudi Arabia.

Recent developments in the Arab world have encouraged voices from Bahrain. The main opposition Party Al Wefaq has staged demonstrations and protests. Although the Khilifa regime has announced reforms and set free prisoners but the opposition is not completely convinced. The whole episode in Bahrain has brought insecurity in GCC countries, especially in Saudi Arabia which has a strong Shiite population in the eastern oil rich provinces.

Recently Saudi Arabia conducted operations in the south against Zaidi Shia’s of Yemen in the southern border region. It is also reported in the international press that the ruling Monarch  of Bahrain was amongst the first few people who met Saudi king Abdullah upon his return from Morocco to his kingdom.

There is an apprehension in Sunni dominated GCC that any big concessions to Al Wefaq in Bahrain will open doors to the  opposition Shiite  groups in other countries like Kuwait(30 % Shiite Population) and Saudi Arab. This will make Pro Iran fractions gain strength and momentum.

There are also reports that a strong Gulf state is sending Tanks and forces to reinforce Bahraini forces to curb the opposition and some analysts believe the announcement of reforms by the Caliph regime is eye wash which will follow the use of force.

On the other side the GCC countries host US power Bases like the CENTCOM head Quarter in Qatar. It’s against US interests to see Iran receiving any kind of leverage in the Arab States, especially in GCC states.  If pro western Arab countries resort to hard measures there is a chance Iran will have to intervene at some point to support the Shiite Population. This may become a pretext for   the Americans and their Arab allies to attack and facilitate calls for a regime change in Iran on the plea of Iranian interference in GCC countries and threat to US bases..

The developments in Middle East will have effects on Af-Pak region Also.  It will force Iran to come out openly in support of Taliban to counter and stretch the American forces. Pak-US relations are presently at an all time low. America and NATO’s neglect to invite Pakistan to the NATO conference on Afghanistan and then efforts to exclude Pakistan in the Afghan settlement and merely treating Pakistan as a Satellite   state have increased the anti American sentiments in Pakistani society which is clearly evident in the Raymond Davis Issue in which neither the government nor the civil society is willing to give any favor to USA.

On other side Helmand and Qandahar operations have given the real picture in Afghanistan where use of force has proved counterproductive. Use of Force against Pashtun Taliban and side lining Karzai, who belong to important Abdali Pashtun tribe, has further aggrieved the Pashtun population and every tough talk by US is making the Taliban insurgency stronger.  In words of Tariq Ali, who once wrote that “it is when such eloquent rhetoric appears that a resounding voice can be heard echoing through the valleys and hills of the Hindu Kush – loud, derisive Pashtun laughter.”

The Russian Foreign Ministry has in clear words given a policy statement that they will not like permanent, U.S bases in Afghanistan and they want US to leave soon.  The whole Strategic Chess board from the Middle East to South and Central Asia is undergoing change. The new emerging situation will give more leverage to Pakistan to protect its vital Interests in Afghanistan and South Asia which the US regime is either not understanding or unwilling to protect; as it’s now clear they want India to be the regional superpower in South Asia to counter China and furthering US interests.

It’s a Strategic Time and history is in the making. Nature has once again given a chance to Pakistan. Now it’s the duty of the Pakistani Leadership to exploit the situation, but this time for the benefit of Pakistan.