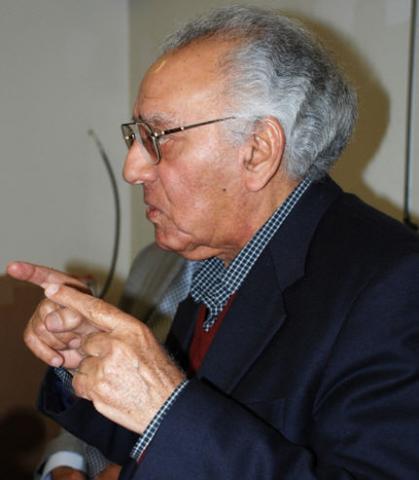 ISLAMABAD, Oct 31: There is a need to redefine Marxism in the light of the present day realities and mobilise masses for social and political change.

The ruling elite and the establishment are unable to meet the gigantic challenges posed by the global economic crisis and the tide of extremism.

This was stated by noted lawyer, intellectual and progressive political leader Abid Hassan Minto at a select gathering here.

The advancement in science and information technology has changed the mode of production and social relationship and the neo-liberal economic system has posed new questions about the status of working class.

Therefore, it is need of the hour to redefine things and generate a broad-based movement taking all white-collar working class into our fold and offer an alternative political platform to the people.

He said Marxism is a social science, not a religious belief. He exhorted the progressive political workers to update their knowledge of Marxist thought with the developments in the fast changing world.

He called for unification of all progressive parties and individuals to launch a mass movement that could culminate in setting up of a democratic egalitarian society.

He identified feudal system as the biggest problem of the country as 60 per cent of the population still lived under its exploitative and inhuman yoke.

There can be no progress in any sphere without abolishing it, he said.

Talks with other groups and individuals are in progress. The formation of the new broad-based party will be announced at a convention in March, he said.

“The recent global economic crisis has provided an opportunity to the communist parties of the developed world as well as those of the developing countries to offer an alternative to the world.”

But, he regretted, they had failed in that important task.

They were in fact confused and could not analyse the present situation and offer an alternative model to the world, although all the neo-liberal economists have admitted that the capitalist system is in crisis and that will continue.

As far as the communists of countries like Pakistanconcerned, Mr Minto, who is President of the National Workers Party, said, they had always been detracted from their struggle for creating a just society by military misadventures and interventions.

Whenever the military junta had intervened stalling the democratic process, the progressive parties have had to renew their struggle for restoration of the constitution and democracy.

On the present political situation in the country, Mr Minto said, as long as the present government fulfilled the demands of the US administration and its western allies, it would not be dislodged by the military.

The military had never and would never defy the US, it could not afford to commit any misadventure, take over power and run the crises-ridden affairs of the country as it was already engaged in a war against extremists in NWFP.

No other political party, including the PML-N, has the guts to take bold decisions and bail out the country from its present economic and socio-political malaise.

On the scourge of religious extremism and the Taliban phenomenon, Mr Minto said it had nothing to do with religion.

It was in fact a conflict between international powers and vested interests over the control of natural resources wherever they were, whether in Pakistan or Sudan or Nigeria.