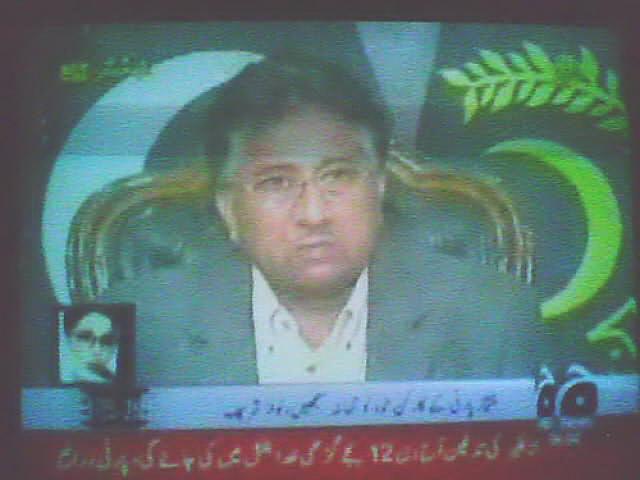 With the results of the elections in Pakistan becoming more clear, it is obvious that Musharraf, despite his promises hasn’t won the confidence of the voters. Crow’s Nest writes, reflecting on those associated with Musharraf.

In the election results of the year 33 former ministers who were closely associated with Musharraf have lost their seats. PML-Q has suffered losses to the seats of those who were stalwarts of the previous administration and were thought to be close to Musharraf himself. the results express more so a disgust and hatred with Musharraf and anything even closely related to him.

Meanwhile, contrary to expectations and despite the flaws, the electoral process appears to have been relatively free of rigging. KO writes

It seems like every single political commentator (which these days is most of Pakistan) was wrong about the elections being heavily rigged.

To be fair, there was a massive and transparent attempt at rigging by the outgoing government, and it would have been enough if the results had been closer – but the difference is so vast in the actual polling results that the rigging was just not enough!

Picked Politics has an account of a British resident.

I spent the whole days on roads, visiting different polling booths. The turn-out was slow but at some booths I saw crowds. In particular, seeing women voters in large numbers was reassuring. I also met British residents like myself, keen on voting. There were also Pakistani American and Pakistani Australian voters.

It was refreshing to see and talk to them but it was not surprising. Pakistan politics over the past few years have become international news with the world’s eyes focused on the region. These European and American residents of Pakistani origin were keen on making a difference.

Over at Metroblogging Lahore, the blog discusses the wins and losses in the city. The Pakistani Spectator seems to think that the outcome of this election signals a departure from tyranny. Pak Tea House asserts that the process and the outcome are a clear sign that the people of Pakistan have chosen to reject extremism of any kind.

They undo the Musharraf paradigm of ousting the two mainstream parties from the political arena; and instituting real democracy that is hostage to the bogey of Islamism and local feudal cliques through non-party local governments.

These elections are also a slap on the face of the global corporate media (and their backers, the global military machine) that had painted Pakistan as a breeding ground for Islamic extremism and dare I say terrorism.

Sepia Mutiny greets the news with a little caution, asking if this really is victory for the people of Pakistan.

So what will we see play out in Pakistan? There will be celebrations for a few weeks. Everyone will denigrate Musharraf some more for good measure. Then the people will see that their new democracy, probably composed of a weak and continually warring “coalition,” isn’t all that and that their leaders are as corrupt as they were the first time around. Eventually the new general in charge of the army will be forced to take over, just like Musharraf did eight years ago.