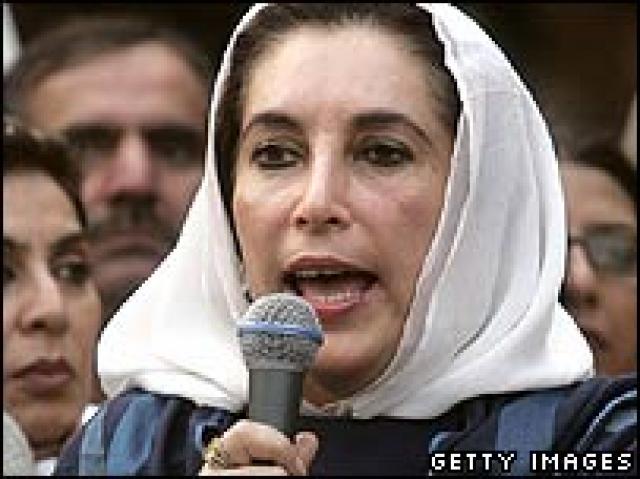 Islamabad: The government of Pakistan lifted the orders of house arrest of Chairperson of the Pakistan Peoples Party, former premier and a popular political leader Mohtarama Benazir Bhutto after few hours on the strict pressure of USA.

Earlier the government had placed her under house arrest only few hours before she was due to lead a large political demonstration against the Gen. Musharraf regime in Rawalpindi on Friday.

A police official told media that she was placed under house arrest ‘for thirty days.’

Nearly 200 police sealed her house in Islamabad and blocked her way to lead the demonstration. More than 6000 police were deployed in Rawalpindi to block PPP workers from going to the rally. PPP leaders say that 5,000 of their workers have been arrested by the police so far. Officials also sealed all the roads to Liaqat Bagh, where the rally was arranged to take place.

Despite this, Mohtarama Benazir Bhutto was able to break one police barricade in an attempt to leave her house, but was blocked from going further by police using every possible means to keep her under house arrest.

Later she told AFP on phone that she was fighting for democracy and still was trying to go through the police blockade.

‘Under no circumstances will the rally be allowed. The law will take its course against anyone who defies it,’ said Rawalpindi Police Chief Saud Aziz according to the private TV channel Geo.

In other cities like Karachi, Peshawar, Quetta and Lahore, police have arrested thousands of political workers and lawyers who were out on the streets protesting the emergency rule.

A complete strike was observed throughout the whole country to show that people widely condemned the government for their ban on media and courts.

Meanwhile, journalists across Pakistan marked Friday as ‘black day protesting against the emergency state and the government’s steps against the media.’

Gen. Pervez Musharraf imposed emergency rule on Nov. 3, stating that the country was heading towards a dangerous situation. He announced later that General Elections will be held before 15 February 2008, but this was rejected by Benazir Bhutto .

Filed under: Politics, World
Share Tweet Pin G Plus Email
previous article: Be careful if you are obese, your long term memory may be affected.
next article: Announcement of election date, and detention of Muhtarima Benazir Bhutto