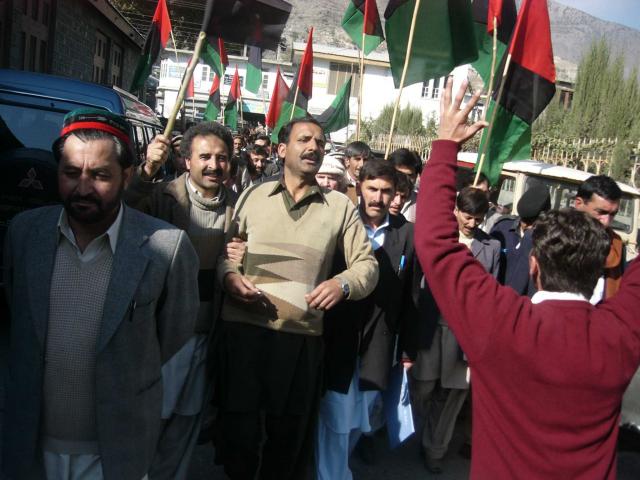 The following is an official letter from the Pakistan People’s Party to Ground Reporter Gul Hamad Farooqi, an active political journalist in the Chitral region of Pakistan.

Pakistan Peoples Party is going through its worst phase of its existence. Our beloved leader Mohtarma Benazir Bhutto was martyred by unknown assailants on December 27th , 2007. The death threat that was issued to her on her arrival after an eight year self-exile in October was executed by the cruel assassins on the said date. In broad day light, in a public rally, among hundreds of thousands of people her life was taken away. Three bullets were fired at her, killing her instantly leaving her followers shocked, grief-stricken and devastated. The larger than life-size person of Mohtarma Benazir Bhutto was no more among us, along with her 20 of our party workers were killed by a suicide bomber that exploded right after the billet-fire.  But alas this was not the end. More trials and tribulations awaited us.

We had yet not recovered from the shock of the violent death of our beloved leader Mohtarma Benazir Bhutto, the blood soaked soil had not dried up and our workers had not even returned from the burial, the state machinery pounced on them with a vengeance unprecedented in our political history. Throughout the country, in all the provinces, particularly in Sindh, hundreds of thousands of our workers were booked under various section of the Pakistan Penal Code.

The arson, the violence, the rampage, looting and plunder that took place as a consequence of her assassination was conveniently put on in our workers’ name. They were held responsible for all the vandalism and violence in the various districts of the country.

Following her assassination, people came out and vent out their anger and resentment by pelting stones, despite the fact that the party had not given any calls of protest or strikes.  The country plunged literally into a wilderness and witnessed the worst kind of violence in the country. One does not know who they were and under whose instruction they were working. According to General Musharaf, jails and police lock up were broken, criminals took to the streets and ransacked private and public property. For three days, every city town and village remained in the grip of miscreant element of the society, while the law-enforcing organizations remained dormant and docile. It was a total failure on the part of the government to establish the writ of the state and control the situation. Thousands of cars, buses and trucks were put on fire. Factories and mills were looted and plundered.

The damage was colossal, the violence was unprecedented. State and social structure totally collapsed. One fails to understand why the authorities allowed this to happen. Was it deliberate? Was it another ploy to hound PPP workers? Was it aimed to inflict another blow on the bleeding hearts of our committed workers?

As the events unfolded themselves, one does not need to think hard to find answers. In times of elections each worker carries a significant importance for the party, without them no party can think of contesting elections. They form the backbone of the election campaign. In this backdrop the three days of violence came in handy for the state authorities. Under sections 324, 353, 146,147,149 and 427 of the Pakistan Penal Code, thousands of our workers were rounded up. According to the Bureau report of the daily Dawn: "latest figures collected from the office of the DIG(Deputy Inspector General) Hyderabad , 1627 cases were registered against 510,351 people in the nine districts of Hyderabad alone between December 27 and January 5." ( January, 10 2008 ) This is the report of  one district only. This happened at least in nine districts. In all the First Investigation Reports, they are charged with arson, riot and destruction of public and private property. However the most surprising section included in all the complaints, is Section 7 of the Anti Terrorist Act, a non-bailable offence, to be tried by special anti-terrorist courts.

It seems that the objective of implicating PPP in these cases is to stall the Pakistan People’s Party election campaign. The only party committed to inclusive politics for the poor and down trodden. Everybody knew that the party was winning the now postponed elections.

Another intriguing aspect of this witch-hunt is that strong PPP candidates for the national and provincial assemblies and former legislators have been targeted. They have been booked on charges of arson and riot.

PPP candidate and former provincial legislator Zahid Ali Bhurgari from Hyderabad has been booked under section 7 of Anti-Terrorism Act for allegedly torching the bungalow of Arbab Zakaullah, a close relative of the former Chief Minister, a close associate of the President of Pakistan. The former federal minister for water and power Liaquat Jatoi, another crony of the Establishment, has lodged FIR( First Investigation Report) against 2 national assembly and 4 provincial assembly candidates in his home town Dadu. Rafiq Ahmad Jamali, former national legislator and Pir Mazhar-ul-Haq former minister have been charged by the former minister for setting his property on fire. Similar cases have been registered against PPP potential candidates such as Jam Ikramullah and Syed Asgher Ali Shah in Ghotki, Sassi Paleejo and Ghulam Qadir Plaeejo in Thatta, Qadir Patel in Karachi .

The Human Rights Cell of the Pakistan Peoples Party condemns in the strongest terms the state persecution against the PPP workers. The brutal assassination of Benazir Bhutto has inflicted deep wounds on the hopes and aspiration on the poor and marginalized people of Pakistan . They know that PPP is the only party that has always remained committed to inclusive politics and democratic values. The clamp down on PPP workers and candidates is to scare them off from voting for the party and campaigning for the forthcoming general elections. We demand that all cases be withdrawn immediately. Harassment of our workers be stopped and candidates should be allowed to campaign freely.

We are enclosing details of the number of reports and cases lodged against our workers for your records.