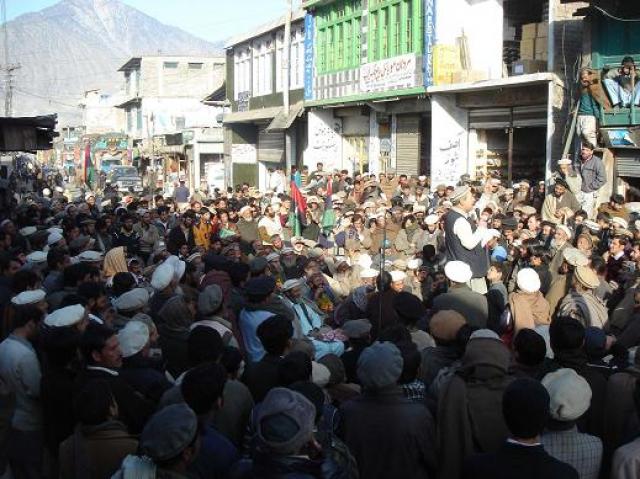 CHITRAL:   Leaders of Pakistan Peoples Party Sherpao (PPP S) group demanded for inclusion of Chitral district in giving age relaxation in recruitment to jobless youths like other parts of Malakand Division. A public meeting of PPP S was held under the chair of Irshad Mukarar president PPP Sherpao Tehsil Drosh while former Provincial Minister of Public Health Haji Bakht Baidar Khan was chief guest on the occasion. Addressing to the public meeting leaders of PPP Sherpao strongly lamented Drosh police for patronizing and supporting of drug traffickers causing for morally corruption and ruining future of youth of the area. They also criticized elected representatives for their failure of public problems. A unanimous resolution was also passed during the meeting. Through a resolution they urged on federal government to not withdraw blasphemy law from the constitution and emphasized on death sentence of occurrence of this law.

They demanded for giving exemplary punishment to gang leaders of Timber Mafia because they involve in cutting of forest of Chitral causing for global warming and affecting environment of the region badly. They demanded from provincial government of Khyber Pakhtonhwa to include Chitral district in age relaxation facility for recruitment like other parts of Malakand Division. They show some papers of provincial government notification for giving age relaxation of one year in employment to jobless youth of Malakand Division  but Chitral has been exempted from this facility despite that an important part of Malakand Division.   They also demanded for remission of agriculture loans to poor peasants of Chitral like other parts of flood affected areas. As banks issuing notice to poor farmers of Chitral for payment of their loans. They also demanded for fulfillment of vacant posts of Doctors and paramedics at Tehsil Headquarters Hospital Drosh. They lamented provincial government for failure posting of doctors to this overcrowded hospital and only 5 doctors serving here instead of 20. A large number of people joined PPP Sherpao from other political parties. Those who spoke on the occasion were Abdul Wali Khan Advocate district president of PPP-S, Irshad Mukarar president of Tehsil Drosh of PPP Sherpao, former provincial minister and central General Secretary of party Haji Bakht Baidar Khan, Zahir Khan, Abdul Hameed Advocate etc. A large number of people were present on the occasion.