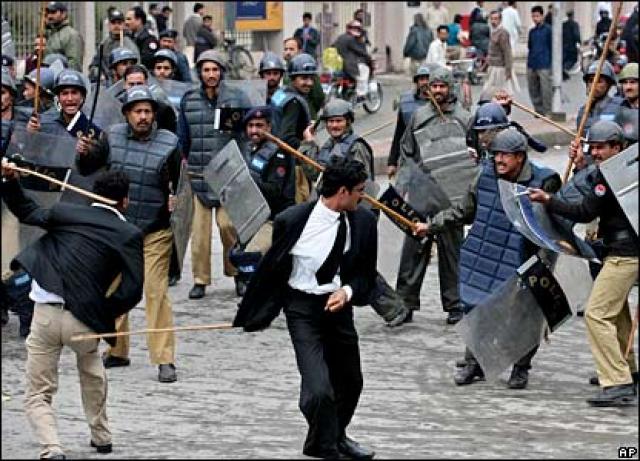 Islamabad, Pakistan- Police have started to crack down on the opposition party activists and lawyers staging rallies against the civilian government led by President Asif Ali Zardari, allege reports of alleged arrests and torture across the nation.

The protests are part of the "Long March," a nationwide demonstration calling for the restoration of judges fired by now-deposed by ex-President Pervez Musharraf.  Lawyers and  activists are traveling from across the nation, and planning to congregate for a final sit-in March 16th in Islamabad.

Pakistan police have begun to block roads, highways and the borders of crossings in Sindh and Punjab. Authorities in Punjab and Sindh provinces have also announced a ban on rallies and have begun arresting political activists.

Meanwhile, President Zardari is holding meetings with his advisers in Islamabad and next 24 hours are very critical.

But despite the ban and detentions, ‘long march’ lawyers and activists are continuing to participate peacefully in the march to Islamabad.

The chief of the Pakistan Muslim League (N), said the it is a defining moment for Pakistan because a free and independent judiciary must provide the justice to the people, not deliberately installed ‘puppet judges’ put in place by the former dictator Pervaiz Musharraf.

The chief addressed a rally today here in Abbotabad, where he called on citizens to take part in the long march.

This is an opportunity to save Pakistan, he said, and we will fight the battle for the survival of Pakistan.

Following actions by the Punjab and Sindh province, the Northwest Frontier Province (N.W.F.P) government has also announced a ban on rallies and detained many protesters.

Today the Police raided the house of the Vice-Chairman of the Human Rights Commission, N.W.F.P chapter, Musarat Hilali. According to reports, police tortured Hilali and broke her leg.