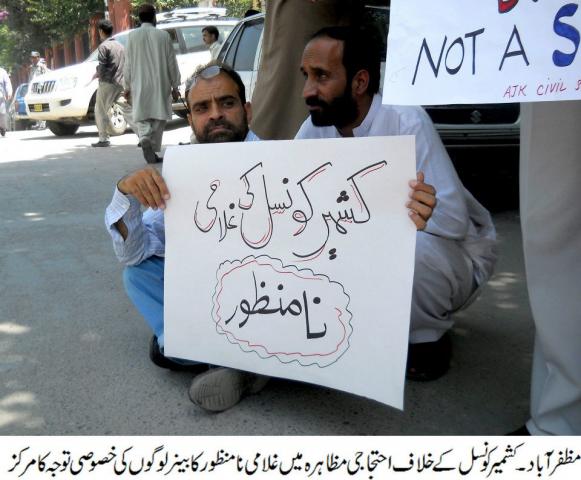 The demonstration, held in the wake of a row between the AJK Accountability Bureau and the AJK Council, coincided with a controlled visit of Prime Minister Raja Pervez Ashraf to the outskirts of Muzaffarabad for inspection of an under-construction hydropower project. However, local media was not invited to the event for fear of upsetting questions on its part.

The prime minister of Pakistan happens to be the chairman of AJK Council, which is at the centre of allegations of corruption and financial irregularities, largely because of non-observance of codal formalities and pre-audit checks in its expenditures.

“No to corrupt AJK Council,” read one of the several placards carried by the demonstrators, including lawyers, students, NGO workers, traders and journalists, as they lined up along the capital’s bustling thoroughfare and later marched through it and the adjacent magnificent district headquarters complex.

The AJK Council, it may be recalled, was established under the Interim Constitution Act 1974 apparently “to serve as a bridge between the governments in Muzaffarabad and Islamabad.” However, over the years, officials and public in AJK believe, it has turned itself into a parallel government, evading scrutiny of its expenditures by investigating and accounting bodies of Pakistan or AJK.

The main income source of Council, which is vested with legislative, executive and financial powers, is 20 per cent of the taxes generated from the AJK territory, which it claims it spends on the administrative expenditure of its secretariat in Islamabad, development activities (in Pakistan and AJK) and other miscellaneous heads.  Apart from the 20 per cent of taxes, it has some other income sources as well, including license fees from the cellular phone companies operating in AJK.

It was the former AJK Accountability Bureau chairman Justice Hussain Mazhar Kaleem, who had dared summon record of some dubious contracts from the Council in the wake of corruption complaints, but the Council officials did not comply with his orders until the AJK government removed him on Friday allegedly under the pressure of vested interests, fuelling anger among the already charged civil society and political circles in AJK.

While calling for abolition of Council and accountability of the Kashmiri taxpayers’ money at its disposal, the demonstrators criticised what they termed as lily-livered AJK rulers for bowing to the pressure of corrupt AJK Council officials.

They also emphasised for long pending constitutional reforms to address such issues.

The interesting aspect of the demonstration was the use of social media to attract its participants, something unusual in this area where modern ICTs are not so common.

Tariq Naqash, a senior journalist, who created a group on Facebook, namely AJK Civil Society Forum, said he was heartened to observe the response of civil society to the posts on social media on the issue.

“It’s the first drop of rain and I am sure the civil society in Aad Kashmir will play a pivotal role in sensitising the decision makers and general public about the issues of national concern,” he said.

Speaking to correspondents on the occasion, Raza Ali Khan, President AJK Supreme Court Bar Association, said the Interim Constitution had undermined the status of the AJK government as it gave excessive executive and legislative powers to the AJK Council over 52 subjects, including taxation.

Mr Khan pointed out that as chairman AJK Council the prime minister of Pakistan was exercising full authority in AJK while he was neither answerable to the people nor to the elected representatives of AJK.

“There is dire need of constitutional reforms to remove such anomalies.”

Abdul Qaiyum Khan, a student, said if the federal government could devolve powers to provinces, why AJK was not being treated in the same manner.

“Why our government is not being empowered? Why we are being made to feel as aliens?”

It may be recalled that in the recent session of AJK Legislative Assembly, Prime Minister Chaudhry Abdul Majeed had announced to work in consultation with all parties for constitutional amendments. However, the government is yet to make a serious effort to move ahead in this regard.