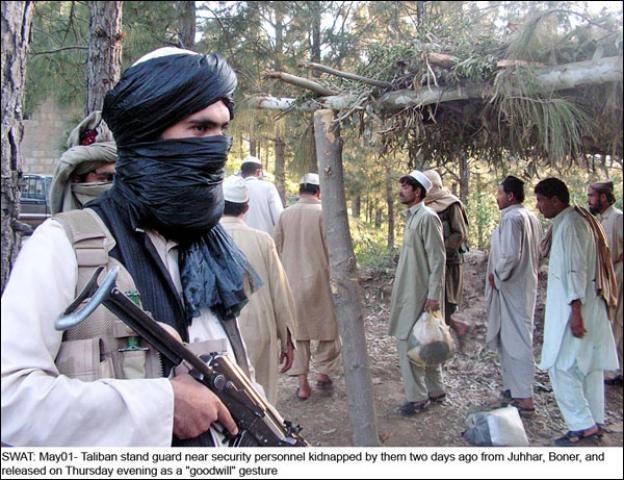 Pakistani Security forces have arrested another important Taliban leader of TTP swat. Sher Muhammad Qassab, who was a hard core Militant of Fazalullah with head money of 10 million rupees (around 120,000 dollars), was arrested in a commando operation in Char Bagh area.  He was, by a profession a butcher and was famous for beheading soldiers and Police men.

Qasab, who with 15 other Taliban commanders in the northwest district had a price on his head of 10 million rupees (around 120,000 dollars), was ‘seriously injured’ and ‘arrested in a military operation,’ the army said in a statement.

‘Troops encircled him from days. His three sons were also killed on Monday during the operation,’ a military official told AFP.

Pakistani troops are more active in NWA because Americans accuse that they are getting their butts kicked from Taliban coming to from this side. Troops are engage in fighting forces of Hafiz Gul Bahader and Mollana Sadiq Noon Dawar.

So far we can observe from reports coming in media that low intensity fighting is going on in NWA and many Soldiers of Pakistan have sacrificed their lives for  Americans.

TTP leadership is hiding and is underground. After the death of Baitullah Mahsud and his Nephew Hakeem Ullah Mahsud, TTP is in process of breakup. All big names during Baitullahs life have become small names hiding from drone or PAF attacks.

is in deed winning its War on Terror but US and NATO on other hand are failures. With Info-Centric modern gadgetry and Troops they have turned bad into worst.

In conceit and Intoxication of Power they have Failed and now blameing their failure on .

Filed under: Opinion, World
Share Tweet Pin G Plus Email
previous article: Marriage Ceremony Of My Elder Brother ‘Adil’ with ‘Mou’ ( a Bengali culture)
next article: Mughal Road connecting to Poonch with Shopian was one of the dreams of great leader Shiekh Abdulla