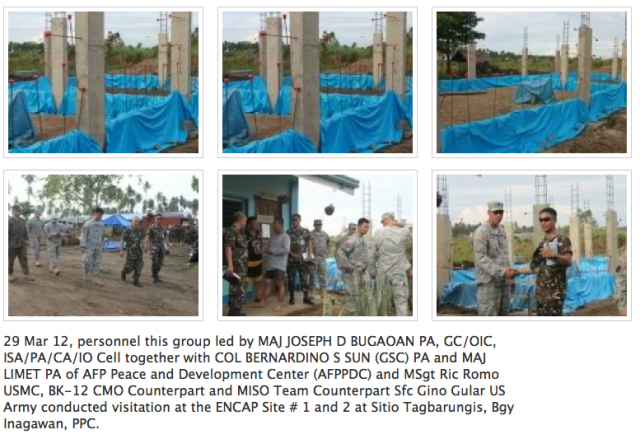 Manila- Six Palawan communities with a total population of over 22 thousand will benefit from this year’s Philippines (PH) – Unites States (US) Balikatan Exercises through its Civil Military Operation (CMO) activities which started March 12.

Primarily, the purpose of the activities is to promote interoperability between the AFP and the US Pacific Command (USPACOM), mature joint and combined CMO capabilities and advance regional security cooperation but the underlying intent of the BK12 CMO is still to aid and assist people in far-flung communities where there are scarcities in their basic needs. This core objective is in line with BK12’s focus on Humanitarian Assistance and Disaster Response (HA/DR) Training.

This year’s Balikatan Exercises is the 28th of its series that calls for a more responsive partnership with the community. It officially starts April 16 and will run until April 27. The third HA/DR focused Bilateral Exercise (the first in 2008 and the second in 2010) of the RP-US Balikatan Exercise 2012 is a combined joint military exercise based on the 1951 Mutual Defense Treaty.

The exercise is designed to enhance the AFP and the USAF’s interoperability in the conduct of not only on traditional military training but also on non-traditional aspects that reach out communities in need of urgent assistance. The activity is conducted every year to serve as a venue for joint and combined training between the Philippine and United States militaries.

“The AFP and the USAF shares the essential goal in the conduct of the Balikatan Exercise 2012, specifically its Civil-Military activities which is putting into top-most priority the welfare and best interests of the people. At the same time, it serves as a very important avenue for us, military forces to help our troops in enhancing their capabilities as well as our capacity as guardians of the national territory and sovereignty,” AFP Chief of Staff, LtGen Jessie D. Dellosa said.

The three-day event, held on March 28-30 is a platform for the region’s cooperative military mechanisms geared at discussing significant security matters. LtGen Dellosa said that the four major areas of cooperation have been prioritized by the senior leaders in the ASEAN Defense-Military Meeting (ADMM) and ASEAN Defense Senior Officials’ Meeting (ADSOM).

LtGen Dellosa said that regional interoperability can be achieved by holding multi-lateral exercises that will simulate trans-border emergency security situations. He also said that the conduct of joint studies, conferences, and intelligence exchange will result to better interoperability in counter-terrorism, maritime security, humanitarian assistance and disaster relief and peacekeeping operations.

In battling terrorism, LtGen Dellosa lauded the success and called for the replication of AFP-hosted gatherings aimed at contributing to regional efforts to improve the counter-terrorism among ASEAN member-states. One of these is the inaugural ASEAN Militaries Analyst-to-Analyst Intelligence Exchange (AMAAIE) Conference on Terrorism last year.

“I am aware that this proposal is a tedious task especially considering the absence of visiting forces agreements and the incompatibility of our equipment and doctrines. Nevertheless, I am optimistic that we could turn this proposal into a reality in the near future,” LtGen Dellosa said in his presentation at the Intercontinental Phnom Penh Hotel in the nation’s capital yesterday.

In terms of maritime security, LtGen Dellosa also suggested a similar framework of multilateral exchanges and exercises through a Maritime Security Regime among ASEAN members, as well as the establishment of an online network for information exchange on anti-piracy operations, illegal fishing, poaching and other transnational crimes.

“While it is a fact that one of the primary mechanisms to achieve interoperability is the holding of joint military maneuvers, which bring together forces from across the region to hone command and control capabilities, these can also be attained through the exchange of strategies and doctrines, fusion of combat and support processes and procedures, and network convergence,” LtGen Dellosa added.

On the other hand, LtGen Dellosa discussed the relevance of the Command Post Exercise in this year’s Balikatan Exercises on humanitarian assistance and disaster relief (HADR). Balikatan 2012 will involve participants from other countries in table top exercises designed to enhance interoperability in HADR.

“The AFP has also earmarked modest military assets and capabilities that may be deployed to ASEAN member states to provide HADR in order to save lives and alleviate people’s suffering in times of disasters when requested,” LtGen Dellosa said.

Having been praised in its peacekeeping involvement in the United Nations, the AFP also expressed keen interest in expanding its peacekeeping operations (PKO). “The findings of our ADSOM-Plus EWG on PKO reveal that our member states have diverse peacekeeping capabilities, ranging from those with developed peacekeeping centers and those that have just decided to venture into peacekeeping,” said LtGen Dellosa.

“As the AFP remains committed towards regional cooperation, it is my fervent hope that we will carry out concrete steps in the short term to build our capacities that will enhance force interoperability in ASEAN into the future,“ LtGen Dellosa added.