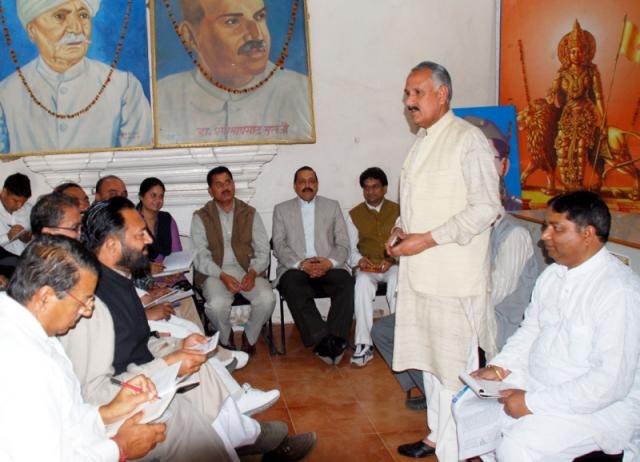 , March 21 (Scoop News) –    BJP State President Shamsher Singh Manhas today alleged that the forthcoming Panchayat elections announced by the NC-Congress coalition are  a fraud with the people at grass-roots level. The whole exercise is aimed at getting crores of rupees as funds from the Union government.

Manhas said that the whole process of Panchayat elections is going to be a futile exercise because on the one hand it is being held without implementation of 73rd amendment of constitution and on the other hand no proper ground work has been done for the conduct of these elections. Not only this, no specification of nomination forms is available, the government machinery at the Block level is totally ignorant of the acurate information to be provided to the candidates, updated voter lists are not available and the staff to be deputed for the purpose do not have any knowledge to handle the ballot boxes in most of the areas till today, when just less than one week is left for the first phase.

Manhas, who visited Samba, Kathua, R.S. Pura and Udhampur during the last two days to discuss the Panchayat elections with party workers and the former Panches and Sarpanches, told that the demarcation of various areas is not clear, which  can create confusion for the contesting candidates.

Manhas further pointed out that though the NC  accuses BJP of being communal, it is actually the NC which has proved to be communal by deliberately fixing whole date for pre-dominately Hindu areas of Udhampur, and Samba on the festival of Basaki on April 13.

Manhas said that the party leadership will  also take up  the issue with the Chief Electoral Officer B.R. Sharma. He stated that the party will carry this issue to the public and expose the intentions of the governement to hold this stage managed election simply to grab money amounting to crores from Centre in the name of grant for local bodies. We will not allow the coalition government to misuse the Central grant by projecting the drama of false Panchayat elections, he added.