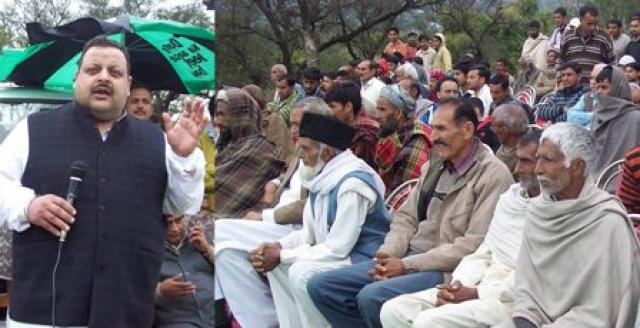 Jammu, February 13 (Scoop News) –  The Coalition government’s decision to setup a three-tier Panchayati Raj and hold panchayat elections in the state is a move to empower the people at grassroot and start a new chapter in the participative governance and empowerment in the state said Devender Singh Rana Political Advisor to the Chief Minister while addressing a public gathering in village Dami of Nagrota assembly constituency.

“This is a mile-stone and  the Chief Minister Omar Abdullah has shown great vision by taking this bold initiative by starting a process of a three-tier panchayat system where the elected representatives of the panchayats , blocks and districts will take decisions regarding governance at the grass root level thereby ensuring transparency, accountability and genuine participation in the system”, he said.

Rana said this would not only help in decentralization of powers but also ensure area specific local development across the state and will give new dimensions to the development of villages in different sectors.

Addressing the gathering Provincial President J&K National Conference Jammu province Rattan Lal Gupta called upon the people to come forward and take active part in the panchayat elections. He said panchayats would be effective tool to give new dimensions to the development of villages.

Rattan Lal Gupta welcomed the new entrants in the party fold and said that door of the party are always open for all those who believe in the programme and policies of the party and have faith in its leadership.

Those who were present on the occasion included Rameshwar Dutt, Som Nath Khajuira, Balwan Singh, Bishan Dass and others.