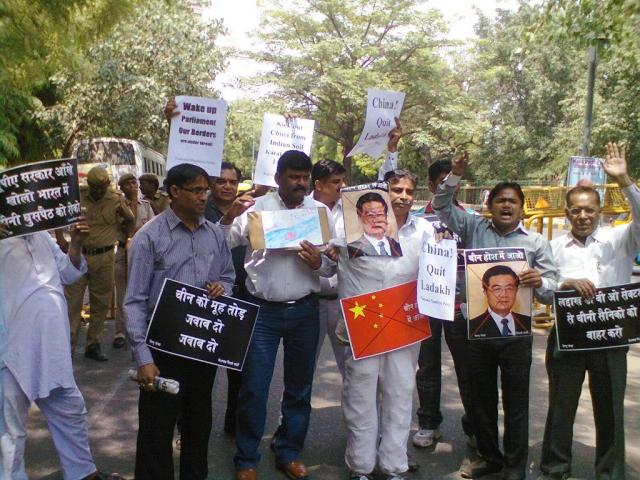 The Panthers activists set afire an effigy of the Chinese President demanding China’s ouster from the Indian Territory in Ladakh which Chinese soldiers had occupied in the Daulat Beg Oldi Sector of Ladakh last week and pitched tents 10 kms inside the Indian Territory.

The Panthers Party Supremo, Prof. Bhim Singh accused the Chinese leaders for trying to sabotage the gains of BRICS conclave in Dublin, South Africa last month by such attacks to undermine the friendship between India and China.

Prof. Bhim Singh reminded the Chinese people who desire for peace with India that it was the Chinese leadership who stabbed the soul of NAM countries by invading India in 1962. The Panthers Party Supremo reminded the people and the leadership in India that it is not the first Chinese incursion in Ladakh. He said that China had illegally occupied approximately 38,000 sq. kms. of Indian Territory. In addition, Pakistan illegally ceded 5,180 sq. kms. of Indian Territory in the Shaksgam Valley of POK (north-west of the Siachen Glacier) to China in 1962.

He regretted that the leadership in India has never cared to bring these facts into the notice of the international community when India has every opportunity to expose Chinese dangerous designs at the international platforms and the United Nations.
The Panthers Party activists who participated in the protest included M/s. B.S. Sajan, Rajiv Jolly Khosla, Om Kishan, Sanjay Kumar, Jitesh Kumar, Advocate D. Vidyanandam, Mohd. Salim, Mohd. Salam, Afzal Khan, Vishnu Gupta, Preetpal Singh, Dharmesh Gupta, Ram Adhar Yadav and others.