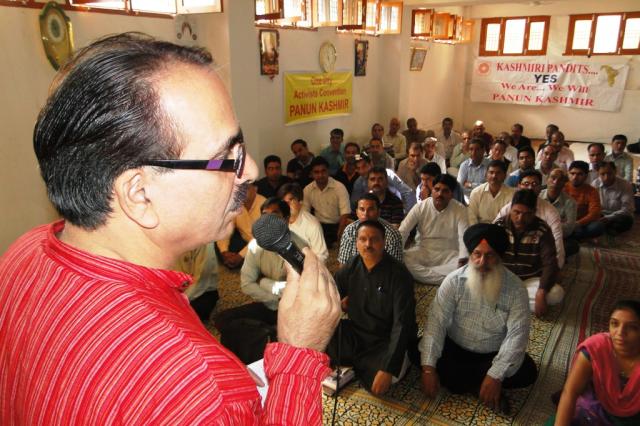 Jammu, November 04(Scoop News)- Panun Kashmir Convener  Dr.Agnishekhar  today expressed anguish over the state chief minister Omar Abdullah’s policy of referring the KP’s issues to central Government thus giving an impression to the Kashmiri Pandits that they are alien in the own state.

Dr.Agnishekhar  was addressing the one day convention which was held in today at Sanskriti Bhawan with a large number of delegates,political advisors and experts who deliberated on the issues confronting  Kashmiri Pandits in their 22nd year of exile.

The convention was organized by Panun Kashmir under the chairmanship of Dr.Agnishekhar,to take stock of the emerging socio-political scenario and the plight and further disintegration of the exiled community.The convention had participants from TRT Jagti,Nagrota,Purkhoo,Muthi,Udhampur and various places of Jammu city.The convention was inaugurated by PK  Convener  Dr.Agnishekhar while Prof.M.K.Raina, Chairman Political affairs committee presided over the inaugural session.The participants deliberated in the ensued discussions and suggested the necessary measures to be taken by the organisation.

In his address Dr.Agnishekhar dwelt at length over the hidden agenda of state government separatist leaders and their apologists who are hell bent to side line the geo-political aspirations and even demands of improvement of living conditions besides overdue enhancement of cash relief to the relief holders.

Prof.M.K.Raina cautioned the community against the vested interests and saboteurs who are apparently working at the behest of agencies to make bridges with the perpetrators of our genocide and exodus.

Eminent thinker and social activist sh P.L.Badgami while deliberating upon the prevailing situation endorsed the belief shared by Sanjay Dattatreya,National Cordinator of PK that no return-package howsoever luring it might appear will substitute the separate homeland dispensation of Panun Kashmir.

The delegates, especially associated with Kashmira Vahini and Youth 4 PK took pledge to reach out to the community  for networking and intensified resurgence  of Homeland movement with optimum utilization of all available support structures. Sushma Rishi, Dr Kshama Kaul & Gayatri Hashia of Kashmira Vahini and Aushtosh along with Umesh Kaul of Youth 4 PK were assigned the job of preparing a blueprint in this regard.

It was decided in the convention that ahead of forthcoming Homeland day, series of corner meetings,seminars,media-interactions and workshops will be held in and outside at ,,Pune, Hydrabad and Bangluru.

Earlier, the delegates were accorded welcome by Chander Prakash and vote of thanks by programme co-ordinator Raja Ji Tickoo.