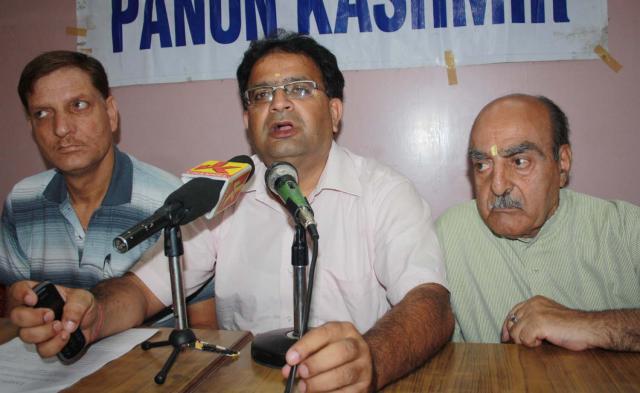 , July 11: Panun Kashmir (PK) has said  that the state government and the centre are trying to portray the hiring of a thousand displaced Kashmiri Pandits as “return of pluralism to the Valley”, and termed the policy “mere tokenism”.

Ajay faction of Panun Kashmir also blamed that the return and rehabilitation policy of Kashmiri Pandits ‘is turning out to be a deception and a tragedy in waiting’.

Addressing a press conference here today the body’s Chairman Ajay Chrungoo said hiring of a thousand displaced people is being showcased as the return of pluralism to the valley and the proof of secular credentials of the state government and politicians in , he alleged.. It seems both the state government and the centre are grafting a symbolic return of Hindus to give a secular colour to a solution of the problem, he added.

“The policy is turning out to be a sinister deception and a tragedy in waiting,” Dr Ajay Chrungoo told reporters in .

More than six months after their recruitment, the newly appointees have not got their salaries and the excuses of the administration are flimsy and demeaning, he claimed.

“These hapless employees are huddled together in make shift rooms, at many places males and females together, with abject paucity of decent living space and privacy,” he charged.

The centre has pushed poor and unemployed youth back to the Valley despite its own assessments that the situation there was not conducive for their return, he said.

He said that these employees are huddled together in make shift rooms at many places with males and females together with abject paucity of decent living space and privacy, claimed.

He also said that even the newspapers have now started registering that the sprit of accommodation for KPs in valley is invariable subject to accepting the political agenda of separatists, he maintained.

He said PK is determined to expose all the alleged deception being perpetrated on people who have been ‘subjected to genocide.’