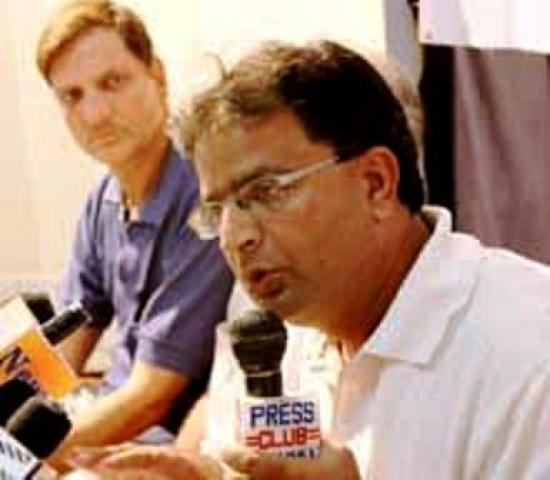 Addressing the media persons at the Press club, Jammu Dr. Ajay Chrungoo, Chairman Panun Kashmir said “The engagement with Pakistan, which the government of India chooses to call peace process, has squarely failed to deliver honorable peace for the nation. Instead it has brought recurrent aggression, humiliation and demoralization for the people of India. The path of this so called peace process is basically a path of suicide. Panun Kashmir has always questioned the very structure of this peace process with Pakistan since the Vajpayee government initiated it and repeatedly brought to the fore the pit falls of this process when the governments lead by ManMohan Singh chose to carry it forward. The recent developments in the region have once again vindicated the stand of Panun Kashmir.”

He further said “it is high time to realize that whatever Pakistan is doing is a logical expression of its security doctrine vis-à-vis India. This doctrine emphatically underlines India as the number one enemy of Pakistan. It is also high time to realize that the treachery and violence which India has repeatedly faced is more a fall out of self deception inherent in this peace process.”

Questioning the rational of the peace process, Dr. Chrungoo, “the structure of this peace process is chosen to give Pakistan parity in deciding the affairs of the only Muslim majority of India. This has bought the religion based identity politics to the Centre stage once again and undermine the secular nation building in India. The peace process has violated the most sacrosanct aspects of our national existence like sovereignty and integrity of the nation. This has been so because the concepts of shared sovereignty and porous borders have been the part of the theoretical basis of this peace process. The formulation of rendering the borders irrelevant has created strategic confusion and also started replacing strategic outlook with naïve wishes. The proclamation we cannot change our neighbors has become a declaration of abdication and absence of options. ”

He further said “this so called peace process has made accommodation with brazen secessionism and Islamic fundamentalism as expression of democracy and nationalism. Last but not the least this peace process has attempted to legitimize the concerns of all those millions of citizens living in the state of J&K who oppose Pakistan, detest separatism and have been standing up to the religious Jihad. It is the compulsion of this peace process which has lead to the policy structure of denial of genocide of the Kashmir Hindus and host aging them to the communal exclusivists order. ”

Making the stand of Panun Kashmir clear he said ” Panun Kashmir demands from the government of India to abundant the present form of peace process with Pakistan which is based on communal ism and secessionism, and instead evolve a new mechanism which consolidates the national forces in the state against the politics of separatism and built effective deterrence against Pakistan’s destabilizing the role in the region. ”