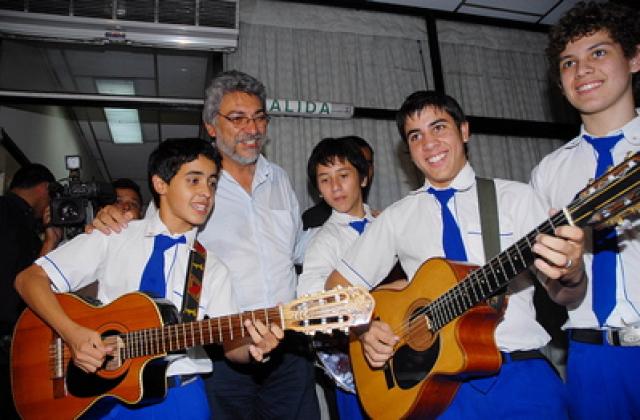 Fernando Lugo , the ex-Catholic bishop candidate for the Alianza Patriotica Para el Cambio (Patriotic Alliance for Change), was recently elected Paraguay’s new President in the elections held on April 20th, and who obtained 40.8% of the votes. He was followed by Blanca Ovelar with 30.8% and Lino Oviedo with 21.9% Pedro Fadul finished far behind with the 2.3% of the votes. Paraguayan Citizens actively participated in the elections with 68% of the population headed to the polls, which was higher than past contests when approximately 30-40% voted in previous elections.

In addition, everything appeared to run smoothly without reports of chaos or violence. Obviously such big news wouldn’t keep Paraguayan bloggers quiet, especially when it is the first time in more than 60 years that another party wins the presidiential elections. On top of it all, the winner was an ex-bishop, rather than a lifetime politician. Here are some additional blog reactions from Paraguay.

Juan Carlos Rojas in his blog called Oasis Liberario [es] says that he is not very optimistic about these new changes:

I am not very optimistic that things will radically change for the better in the next five years, but I am optimistic in the sense that if Lugo thinks of following the (Hugo) Chávez model, then things won’t go so well, especially since the Congress is comprised of the more conservative sectors of society and through them, the Bishop President must pass his laws.

Luz in her blog called Relatos y Sueños [es] talks about her hope that the new President knows what people expect from him and his new government group: honesty and a way to raise the pride of Paraguayans once again. She also hopes for less fanatics and more social work to elevate the self confidence of many Paraguayans abroad, so that they can return home.

Luis Bareiro on his blog Macondo News [es] tells us about his feelings about what is like finally defeating “the enemy.”

and says that his youth he spent fighting for the future with many on his side but they didn’t succeed before, but they kept fighting because they knew they would win and that someday it would be defeated… in his words: We won, We won, We won, today is my glory day…don’t doubt that im enjoying like a tiny that has defeated a giant perverse and inhuman ….

I spent my youth fighting for the future, with others at my side, we didn’t accomplish anything at the time, when it should have happened during its time and place. Some of them abandoned the effort, others more determined and stubborn, we maintained, we didn’t have the weapons that you boasted about, the dirtiest, the most perverse, but in spite of all that, the only thing that you managed to accomplish was that the effort strengthened, with wishful thinking that you made fun of with your perverse actions, but “naively” how you judged our reasons, we knew that someday you would be defeated. We defeated you, we defeated you, we defeated you, today is my day of glory…Do not doubt that today I am enjoying this, like a small one that defeated a giant, perverse and inhumane giant.

Finally, Blog Sacoleiro [es] talks about outgoing president Nicanor Duarte’s “duality” saying that he will be judged like a president that has suffered from a double personality syndrome. In the future Nicanor will be remembered more for his contributions than for his failures, but mostly he will be remembered because of his duality of assuming two personalities. In the blogger’s words he says: “Today we celebrate the advances and fight to correct the failures, advance in what we went backwards, fight for the goverment reform and for the end of the Clientelism that harmed many of us.”