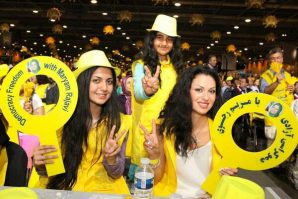 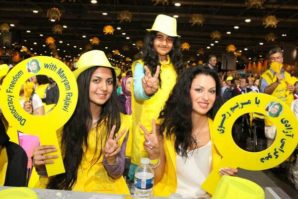 Paris was the scene of tens of thousands of Iranian opposition supporters staging a grand gathering calling for regime change in Iran and blasting the appeasement policy of providing sanctions relief vis-à-vis Tehran.

The rally was organized by Iranian exile organization, the National Council of Resistance of Iran (NCRI), attracting dozens of current and former American officials from both sides of the aisle. A colorful array of European and Middle East dignitaries also voiced support to change the mullah’s dictatorship in Tehran.

The main speaker of the rally was NCRI President Maryam Rajavi who has successfully gained the backing of a long list of influential figures in American politics and in Congress.

“The mullahs and Daesh are reading from the same script. Both espouse a similar reactionary ideology, which is diametrically opposed to the pristine teachings of Islam. They have a similar modus operandi when it comes to barbarity and savagery… as long as the regime’s occupation of Syria, Iraq and Yemen continues, we cannot confront Daesh effectively,” she said.

Congressman Ed Royce from Californian, Chairman of the House Foreign Affairs Committee, was amongst the high-profile faces who sent a message of support, emphasizing to the rally how the Iranian regime truly represents the epicenter of Islamic extremism in today’s world.

“This regime has taken the country in reverse. Recent reports found that under President Rouhani, the government of Iran has incarcerated hundreds of political prisoners and prisoners of conscience while executing nearly 1,000 people last year,” Rep. Royce said.

A year down the road in the nuclear deal with the international community Iran is widely known to continue funding terrorism and inciting havoc in its ongoing campaign to gain dominance in the Middle East. Tehran is taking huge advantage in the absence of a strong international will to establish peace and security in the region.

Senator John McCain (R-AZ), Chairman of the Senate Armed Forces Committee has also introduced Senate Resolution 42 “to express the sense of Congress regarding the safe and expeditious resettlement to Albania of all residents of Camp Liberty.”

Several other American lawmakers including Judge Ted Poe, Chairman of the Subcommittee on Terrorism, Non‐proliferation and Trade and Reps. Brad Sherman and Judie Cho voiced support for the Iranian Diaspora. Congress has recently witnessed in May the House Foreign Affairs Committee unanimously adopting Resolution 650 focusing on the safety and security of Liberty residents.

A long list of significant American figures taking part in the rally backed Maryam Rajavi’s 10-point plan based on a non-nuclear, democratic Iran where executions are abolished and gender equality rules the land.

Prince Amir Turki al-Faisal, former Saudi intelligence chief, took part in the rally as a guest speaker. His presence amongst a wide variety of Arab delegations symbolizes a regional will to unite with the Iranian opposition to uproot the Iranian regime menace in the region.

“Your fight and struggle against the Iranian regime will triumph soon and this is a matter of when, not if,” Dr. Faisal said to the crowd.

Addressing the slogans of the crowd for regime change, Dr. Faisal emphasized, “I want regime change, too. We in Islamic World will support you from the depth of our hearts.”

The nuclear deal with Iran has distracted the international community from a drive by the West aimed at adopting a policy to support the Iranian regime’s overthrow.
“There is no reason for making a deal with the head of terrorism, it is nonsense to give them money for any reason and the atomic agreement only helps them to have more money for exporting terrorism around the globe,” Speaker Gingrich underscored.

U.S. policy on Iran cannot be non-parallel to the will of Middle East countries for fundamental change in Iran. A policy based on the roots of appeasement pursued by the Obama administration has to this day resulted in grave consequences and detriments across the region and around the globe. Without a doubt, both President Barack Obama and his successor need to fall in line with the will of regional nations and the Iranian people’s organized opposition to ultimately establish peace and stability in this flashpoint region of the world.